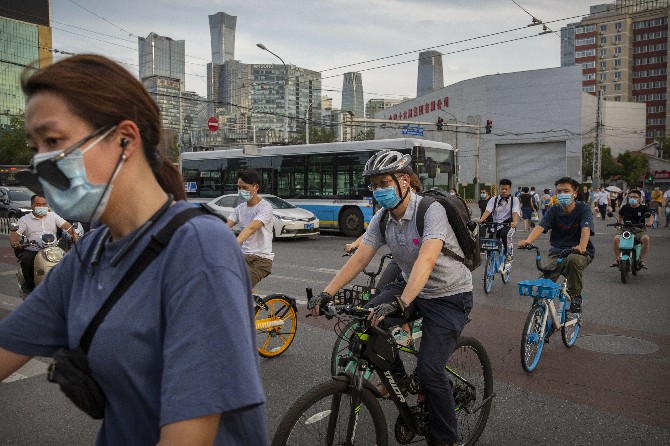 China and the World Health Organization are discussing plans to trace the origin of the coronavirus outbreak following a visit to the country by two experts from the U.N. agency, the foreign ministry said yesterday.
Ministry spokesperson Wang Wenbin told reporters the experts conducted “preparatory consultations on scientific research cooperation on virus tracing” during their two-week stay, which ended Sunday.
Their talks touched on research in the areas of population, environment, molecules, animal traceability and transmission routes of the coronavirus, as well as plans for further scientific research, Wang said.
The two sides also further investigated the possible animal source, intermediate host and transmission route of the coronavirus to “more effectively prevent and control the epidemic,” Wang said.
Wang said the two sides worked on formulating a plan for China’s contribution to the global tracing effort under a resolution passed by the World Health Assembly under WHO. No word was given on when that effort will begin in earnest.
The virus was first detected in the central Chinese city of Wuhan late last year and has been linked to a wholesale food market where wild animals were sold. Scientists think it likely jumped from a wild animal such as a bat to humans via an intermediary species, possibly the anteater-like pangolin.
However, China says a full investigation may have to wait until the pandemic is under control and has rejected accusations that it delayed releasing information to WHO at the start of the outbreak.
The World Health Organization said earlier an advance team looking into the origins of the COVID-19 outbreak has concluded its mission in China, and the U.N. health agency is preparing the deployment of a larger group of experts to the suspected outbreak zone.
WHO Director-General Tedros Adhanom Ghebreyesus said the “international team” will deploy to Wuhan, the city where the pandemic is believed to have erupted late last year. Tedros said “terms of reference” have been drawn up by the WHO and China, but he did not specify.
“The WHO advance team that traveled to China has now concluded their mission to lay the groundwork for further joint efforts to identify the virus’ origins,” he told a news conference. “Epidemiological studies will begin in Wuhan to identify the potential source of infection of the early cases.”
He said “evidence and hypothesis” generated from the work would “lay the ground for further, longer-term studies.”
The comments came amid an increasingly heavy toll from the pandemic in the United States, Brazil and India, as investigators seek to clarify the origins of the virus and how it may have jumped from animals to humans late last year.
Dr. Michael Ryan, the WHO’s emergencies chief, noted “gaps in the epidemiological landscape” and said it would be assessed what studies to conduct and what data to collect. He said the two-person advance team had not returned from China, and had not been “debriefed” yet.
“The real trick is to go to the human clusters that occurred first and then to work your way back systematically looking for that first signal at which the animal human species barrier was crossed,” Ryan said. “Once you understand where that the barrier was breached, then you move into the studies in a more systematic way on the animal side,”
The WHO press office, contacted by The Associated Press after the news conference, did not provide details of the terms of reference, say whether they would be made public, or indicate how big the international team would be or when it could be sent to China.
It said team members had “extensive discussions” with their Chinese counterparts during the three-week visit, and had discussions by video with virologists and other scientists in Wuhan — including the Wuhan Institute of Virology. U.S. President Donald Trump in April claimed to have seen evidence to support the theory that the lab was the origin of the virus.
On Sunday, Dr. Deborah Birx, the White House top coronavirus adviser, said the virus was “extraordinarily widespread” in the U.S. and infections in urban and rural America marked a “new phase” for the pandemic in the country.
Ryan, asked to comment about such remarks, said he didn’t believe the intention was “to create a sense of a new phase … but to really remind all states that the disease never went away.”
“It’s not our job to tell the U.S. what it should be doing at sub-national level: The state-based planning and implementation guided by the national scientists seems to be (on) the right path,” Ryan added. “The difficulty for us all is: sometimes we know the right path. The difficulty is choosing to walk it.” MDT/AP