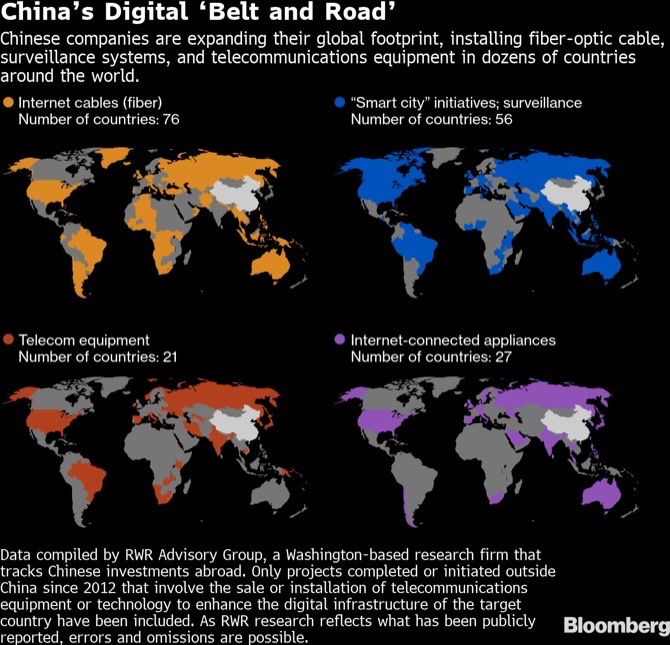 A swathe of the world is adopting China’s vision for a tightly controlled internet over the unfettered American approach, a stunning ideological coup for Beijing that would have been unthinkable less than a decade ago.

Vietnam and Thailand are among the Southeast Asian nations warming to a governance model that twins sweeping content curbs with uncompromising data controls – because it helps preserve the regime in power. A growing number of the region’s increasingly autocratic governments watched enviously the emergence of Chinese corporate titans from Tencent Holdings Ltd. to Alibaba Group Holding Ltd. – in spite of draconian online curbs. And now they want the same.

The more free-wheeling Silicon Valley model once seemed unquestionably the best approach, with stars from Google to Facebook to vouch for its superiority. Now, a re-molding of the internet into a tightly controlled and scrubbed sphere in China’s image is taking place from Russia to India. Yet it’s Southeast Asia that’s the economic and geopolitical linchpin to Chinese ambitions and where U.S.-Chinese tensions will come to a head: a region home to more than half a billion people whose internet economy is expected to triple to USD240 billion by 2025.

“For authoritarian countries in general, the idea of the state being able to wall off to some extent its internet is deeply appealing,” said Howard French, author of “Everything Under the Heavens: How the Past Helps Shape China’s Push for Global Power. “This is about the regimes’ survival in an authoritarian situation. So that’s why they like to do this. They want to be able to insulate themselves against shocks.”

Vietnam’s controversial version went into effect Jan. 1 – a law BSA/The Software Alliance, which counts Apple Inc. and Microsoft Corp. among its members – called chilling and ineffectual. Indonesia, the region’s largest economy, already requires data be stored locally. The Philippines has stepped up what critics call a media crackdown, arrested the head of media outlet Rappler Inc. after it grew critical of President Rodrigo Duterte. And last year, the government of former Malaysian Prime Minister Najib Razak introduced a fake news law used to probe his chief opponent, though the current government may yet repeal it.

One of the latest to buy into the rationale is Thailand, which on Feb. 28 passed a cyber security bill modeled on China’s that grants the government the right to seize data and electronic equipment without a court order in the interests of national security. Introduced just weeks ahead of Thailand’s first democratic election since a 2014 military coup, it stoked concerns it could be used to stifle dissent, though the government says it shouldn’t affect companies “with good conduct.” The Asia Internet Coalition, an organization that groups the likes of Alphabet Inc.’s Google, Amazon.com Inc., Facebook Inc. and Twitter Inc., condemned a bill Amnesty International warns could be used to “cage the internet.”

The crux of a Chinese internet model is data sovereignty: information of citizens must be stored in-country and accessible on demand to the authorities, a concept enshrined in Chinese law since 2017. That’s raising hackles in Washington, which aims to counter Beijing’s sway – a longer-term struggle that may be the single most important episode in world affairs since the collapse of the Soviet Union. Escalating tensions between the two richest economies will impact just about every country across the planet – economically and socially.

The U.S., for its part, worries that the spread of Chinese technology and ideology in Southeast Asia means Beijing will increasingly push a strategically vital region toward authoritarianism, even as individual countries grow wary of becoming beholden to China. The spread of a Chinese- style internet is a problem for U.S. internet giants from Facebook to Google wrestling with increasingly draconian regulations over what they carry on their platforms, and how they store and handle the information pivotal to their dominance. Fragmented laws governing data are anathema to giant corporations used to harnessing the cloud for everything from search to video.

“If authorities in the region can convince Silicon Valley to play by their repressive rules, we’re going to see a drop in standards of privacy, surveillance, and freedom of expression on those platforms,” said Tanya O’Carroll, head of technology and human rights at Amnesty International. “How Silicon Valley chooses to engage with the likes of Vietnam, Thailand and Cambodia could set major precedents. They must not treat those countries as testbeds to tinker with people’s rights online.”

For now, U.S. social media is popular enough that in countries like Thailand they’re able to publicly resist attempts to rein in content. But in the longer term, there’s a real risk American companies could get supplanted by the likes of WeChat, TikTok and Alipay – Chinese powerhouses that’re venturing aggressively abroad, into music and social media or e-commerce. Tencent, Alibaba and Bytedance Ltd. are also seeding the region’s startups, courting a younger mobile-savvy consumer – a generation that politicians need to maintain their grip on power.

“This issue was not on my radar and not on other people’s radar a year ago,” said Brian Harding, deputy director with the Southeast Asia Program at the Center for Strategic and International Studies. Washington for now is more focused on the political impact of Chinese investments in infrastructure from ports to refineries, he added.

“But in terms of the Digital Silk Road, interest is rising very quickly,” he said. “Data localization is a real challenge for U.S. companies – localization policies make it difficult to have economies of scale in doing business across the region.”

Chinese cadres have long proselytized the concept of a rigidly policed web that can still be a wellspring of innovation. Tencent’s billionaire-founder, Pony Ma, joined government officials in declaring in December it’s their country’s destiny to become an internet power.

Southeast Asia has thus become a testbed for Beijing’s political objectives, a jumping-off point in a long-term campaign to extend its influence around the globe. The U.S. fears the Communist Party’s vision of a web where governments pull the strings could wind up the model for the next billion users. Lulu Yilun Chen & Yoolim Lee, Bloomberg