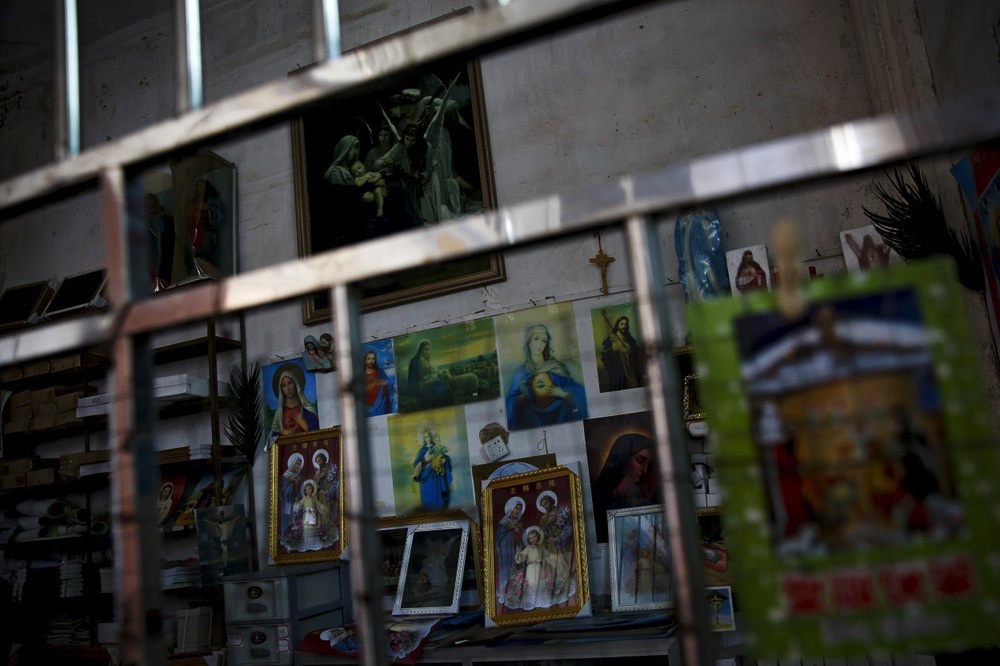 Catholic religious paintings and Bibles are displayed behind bars at an underground Catholic church in Jiexi county, Guangdong province

China named an official known for tearing crosses from the roofs of churches to lead the agency that oversees Hong Kong, in the biggest shakeup yet after months of unrest.

Xia Baolong, 67, the vice chairman of the Chinese People’s Political Consultative Conference, will replace Zhang Xiaoming as director of the Hong Kong & Macau Affairs Office, the State Council said Thursday. Zhang will become a vice director, it said, and will be responsible for day-to-day tasks.

The director of the Macau Liaison Office, Fu Ziying, and his Hong Kong counterpart Luo Huining were also appointed deputy director of Hong Kong Macau Affairs Office while at the same time they remain as heads of the two Liaison Office institutions in the SARs.

Xia is a former close aide to President Xi Jinping and served as Communist Party chief of Zhejiang province during the crackdown on Christian churches.

Xia’s installation follows last month’s appointment of Luo Huining as head of China’s Liaison Office in Hong Kong. The choice of Luo, a Communist Party cadre known for executing Xi’s anti-corruption campaign, was seen as a signal of Beijing’s intention to restore order over Hong Kong after months of violent unrest opposing China’s grip on the city.

“The reshuffling at this interesting moment may point to a deep distrust from Xi Jinping toward the former faction dealing with Hong Kong affairs,” said Sonny Lo, a Hong Kong-based academic and political commentator.

“It’s clear that Xi Jinping wants to have a clear grasp of the situation in Hong Kong – that’s the major point,” Lo added. “We’ll probably see some adjustment in Chinese policy toward Hong Kong.”

Xia is one of the highest state level leaders managing the SARs’ affairs office. He is currently the Vice Chairman of the National Committee of the Chinese People’s Political Consultative Conference (CPPCC). Unlike Zhang, Wang and Liao, Xia has a rich background in important positions at the Chinese Communist Government.

The rare appointment of such a senior official potentially signals a permanent overhaul in how Beijing manages the former British colony. The Communist Party issued a communique late last year signaling greater intervention in everything from education in Hong Kong to how the city picks its leader.

Xia’s push in 2014 and 2015 to tear down crosses on the roofs of churches in ­the eastern province of Zhejiang was widely criticized by the international community. He was subsequently appointed to a leadership role on the CPPCC, the nation’s political advisory body and a post usually seen as a transition toward retirement for senior leaders.

Xia’s appointment came as much of the world was focused on China’s replacement of top officials in virus-stricken Hubei. Yesterday, China also announced the replacement of Jiang Chaoliang, the party’s Hubei secretary, according to the official Xinhua News Agency.