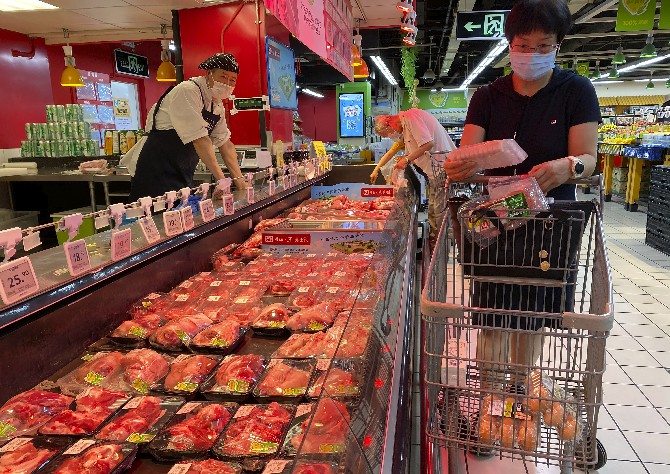 China’s capital was bracing yesterday for a resurgence of the coronavirus after more than 100 new cases were reported in recent days in a city that hadn’t seen a case of local transmission in more than a month.
The United States, meanwhile, continued to struggle with an outbreak that appeared ready to stretch on for months or even years, and the governor of hard-hit New York state threatened to reinstate business closings.
China, where the virus first appeared late last year, reported 49 new coronavirus cases yesterday, 36 of them in Beijing. All have been traced to a wholesale market that supplies much of the city’s meat and vegetables.
Beijing has closed the Xinfadi market, ordered testing of all its workers and is requiring anyone who traveled there to self-isolate for two weeks.
Chinese health authorities said the strain of virus was similar to that seen in Europe, but there was no immediate evidence of a connection.
In response, Beijing has suspended the restart of some classes and reversed the relaxation of some social isolation measures. Neighborhoods close to the market have been put on lockdown and more than 76,000 people tested.
China’s authoritarian communist political system and tight social controls enable tracking of residents’ movements through the use of social media. Entry to office buildings and grocery stores requires proof on a smart phone that the person has not traveled to areas where the virus is still active.
India’s Health Ministry reported a jump of more than 11,000 new infections nationwide for a third consecutive day yesterday. The country’s home minister offered 500 train carriages for use as makeshift coronavirus hospital wards as New Delhi struggles to contain a spike in cases.
The Indian capital has about 9,000 beds dedicated to COVID-19 patients in public and private hospitals, but a state government panel of experts has said it will need at least 15,000 beds by the end of June.
In the U.S. cases in nearly half of states are rising. The U.S. already has recorded more than 2 million confirmed coronavirus cases and upward of 115,000 deaths, according to data compiled by Johns Hopkins University.
Upset by “rampant” violations of New York’s pandemic-fighting restrictions, Gov. Andrew Cuomo threatened to reinstate closings in areas where local governments fail to enforce the rules.
Manhattan and Long Island’s tony Hamptons were singled out as problem areas by Cuomo, who cited 25,000 complaints statewide of reopening violations. The large gatherings, social-distancing violations and lax face-covering enforcement endanger the state’s fragile progress in the fight against the coronavirus, Cuomo said, adding that many complaints involve bars and restaurants.
“We are not kidding around with this. You’re talking about jeopardizing people’s lives,” Cuomo said yesterday [Macau time] at his daily briefing.
New York officials are trying to avoid the fate of states seeing a surge in new cases after reopening. New York’s coronavirus-related hospitalizations are declining and the state recorded 23 deaths Saturday, the lowest one-day coronavirus death toll since the early days of the crisis.
Russian President Vladimir Putin blamed America’s lack of centralized authority for its inability to stem the spread of the virus, while saying Russia was “working quite steadily and getting out of this situation … with minimal losses.”
In the U.S., “this is not happening,” Putin said, noting the central and regional governments work more closely in Russia.
Russia, nevertheless, has recorded more than half a million infections and nearly 7,000 virus deaths, according to the Johns Hopkins University count.
South Korea is also among countries seeking to prevent a resurgence of the outbreak, reporting 37 new cases of COVID-19 yesterday. The Korea Centers for Disease Control and Prevention said 25 of the cases came from the Seoul area, where health authorities are scrambling to trace infections linked to entertainment and leisure activities, church gatherings, warehouse workers and door-to-door sellers.
In Peru, a Catholic Mass was held for the thousands who have died in the pandemic that is burning across Peru and South America as a whole.
Archbishop Carlos Castillo used his broadcast homily to criticize a health system he said “is based on egotism and on business and not on mercy and solidarity with the people.”
COVID-19 has taken at least 6,400 lives in the nation of some 32 million people — a toll second only to that of Brazil within South America.
In France, restaurants in the Paris region will be allowed to join those in the rest of the country in opening indoor seating starting this week. From June 22, all nursery schools, primary schools and junior high schools will be open and mandatory for all students.
France is reopening its borders with other European countries and will start allowing visitors from other continents on July 1st.
In Africa, where the virus continues to spread, Ghana’s Health Minister Kwaku Agyemang-Manu has contracted COVID-19 and is undergoing treatment at a hospital.
Ghana has one of highest number of confirmed cases in Africa because of its robust testing, with more than 11,400 cases. Health authorities have reported 51 deaths. KEN MORITSUGU, BEIJING, AP