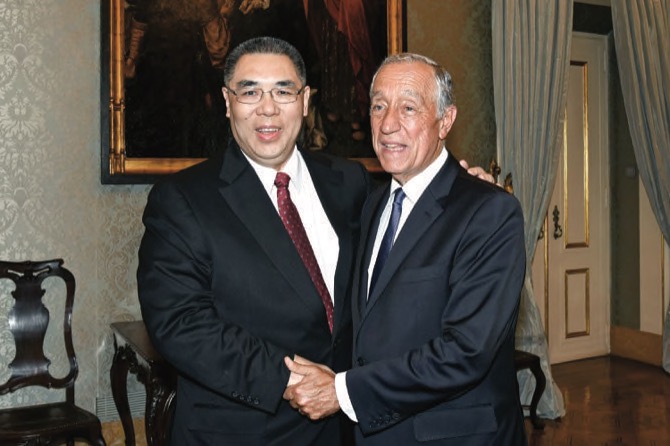 The meeting is a continuation of the talks started in Macau when the Portuguese President visited the city for a day on May 1, a note from the Government Information Bureau stated.

Macau “is developing well, especially in the field of economic diversification,” he said, noting that progress has been made in business investments, science and technology, and the Forum for Economic and Trade Cooperation between China and Portuguese-speaking Countries in Macau has played an important role.

He explained that the sustainable development of the Portuguese language in Macau will enhance the connection and cooperation in the fields of culture, society, economy and trade, science and technology and tourism with the Portuguese-speaking countries.

The president’s remarks were echoed by Chui, who said that his government will make the Chinese-Portuguese platform better.

Chui, who is on his official visit to Portugal starting Sunday, said that thanks to the traditional friendship and historic connections between Macau and Portugal, bilateral cooperation has made rapid progress with joint efforts from both sides.

He expressed confidence that there will be great potential for cooperation between the two sides under the framework of the Belt and Road Initiative and the Greater Bay Area.

Also yesterday, Chui attended the Macau SAR’s reception and a photo exhibition in Lisbon, which is to commemorate the 20th anniversary of the establishment of the Macau SAR. RM/Agencies