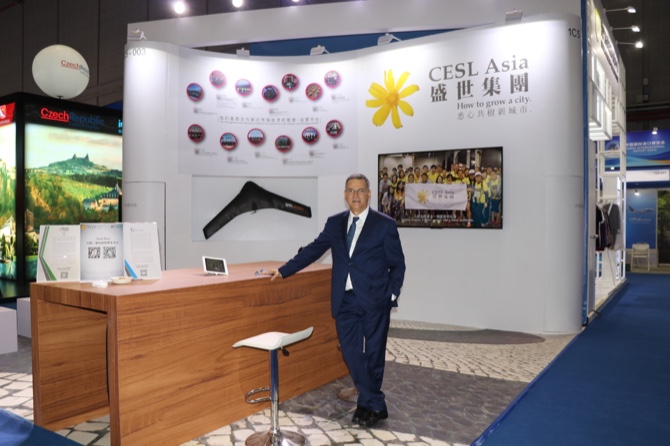 Service and technology solutions provider CESL Asia will be one of a few local companies to attend the first China International Import Expo (CIIE) held in Shanghai this week.

CESL Asia is not a part of the official Macau delegation to the event, but rather registered their own attendance as a separate entity, company CEO Antonio Trindade told the Times during a telephone interview this week. Trindade says that he understands CESL Asia is the only company from Macau to have done so.

“The expo is huge. I have never seen an expo of this magnitude – the whole world is here,” Trindade said, adding that, “actually, the Macau presence here is light, [aside from] a bit on the food and beverage floor.”

The Macau delegation comprises about 90 local businesspeople and two pavilions in the exhibition area that represents, among others, 39 companies involved in trade in products made in Macau and food and beverage products from Portuguese-speaking countries with distribution channels in Macau.

These companies include some that provide professional services for the Portuguese- speaking market, with a view to presenting and reinforcing Macau’s development position as a platform for trade and cooperation with the lusophone world.

CESL Asia is hoping to use the expo to showcase its business propositions, as well as to “promote the advantages of its Macau management platform for Chinese investments and operations of businesses in Portuguese-speaking countries,” according to the company.

The company is exhibiting its experience of investing, managing and operating its new energy power plants in Portugal.

It also wants to introduce several of its partner companies to the mainland market, including highlighted firms Portugal’s Spin.Works and Monte do Pasto.

The former company offers services and products ranging from the design of aircraft and mechanical autonomous systems, image processing, development of space missions, and applications for artificial intelligence platforms, while the latter is an agricultural business that introduced modern management systems to become the Iberian Peninsula’s leading producer and exporter of cattle.

“Our intention is to collaborate with local Chinese companies, and that includes exchanges in technology, services and products,” explained Trindade. “We are looking at how companies of all sizes, whether in China or Macau or elsewhere, can add value to each other through collaboration.”

For Trindade, the future development of China’s economy depends on finding ways to increase efficiency and “value-adding” – and that will require cross-border cooperation between firms and communities.

“For example, a car, in the rest of the world, uses parts made from around the world and [sourced] from different markets. Otherwise [if you don’t] you are not the best, and you will never be the best,” he said. “Collaboration here is key.”

The Associated Press reported this week that the Import Expo is intended to rebrand China as a proponent of free trade that abides by the rules of the game.

President Xi’s government is emphasizing the promise of China’s growing consumer market to help defuse complaints that Beijing abuses the global trading system by reneging on promises to open its industries, it said. DB