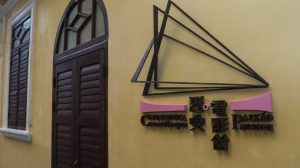 The Cinematheque Passion, under the Cultural Affairs Bureau, will host a talk titled, “Cinematography: Creativity Behind the Viewfinder”, on June 18, from 3 p.m. to 5 p.m. The talk will be conducted by renowned Hong Kong director of photography, O Sing-Pui. During the talk, O will explore the role and capabilities of the cinematographer, analyze the relationship between photographer and film, and share his personal experiences and vision of cinematography. In 1986 O Sing-Pui completed his first directorial work, “The Story behind the Concert”; in 1997 he was the director of photography for the film, “Made in Hong Kong” and since then he has worked on Hong Kong productions such as “You Shoot, I shoot,” “Heroes in Love” and “The Pye-dog.” There are 60 seats available.

Part of the roof of the second floor side hall of Saint Augustine Church collapsed yesterday afternoon while a mass service was being at the site. According to a TDM report, nobody was injured in the collapse, but wooden structures were exposed and square tiles and a wooden girder fell off. Firefighters were called to the site after receiving the report and they evacuated churchgoers upon arrival at the scene. A preliminary investigation has shown that the small collapse on the second floor did not structurally damage the building, with the main hall and exterior wall holding in a safe condition. However, the Cultural Affairs Bureau has closed the church while repairs are made and a full investigation is conducted. An inspection by the bureau last year of the site did not find any damage.

Accountants from Hong Kong and Macau will be eligible to apply to be partners of accounting firms on the mainland from June 1, according to an announcement made on Friday, Xinhua reported. The move aims to encourage accountants from the two special administrative regions to explore opportunities on the mainland, the Ministry of Finance said. They should meet the legal requirements for mainland-registered accountants, as well as those regulations regarding partners in accounting firms, it stressed. Accountants from Hong Kong and Macau must have a residence on the mainland and stay there for no less than six months every year, it added.