Civil servants should be allowed to nominate candidates: Neto Valente 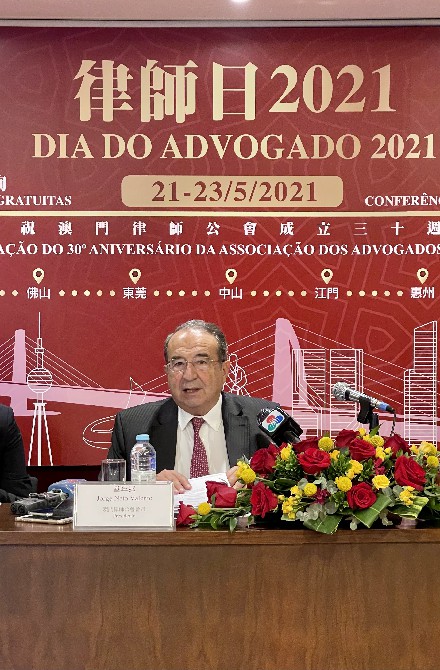 Jorge Neto Valente, President of the Macau Lawyers Association, said yesterday that civil servants should have the right to nominate candidates at parliamentary elections, although he thinks that their participating in a candidate’s campaign is a matter for debate.
The veteran lawyer made the comment on the sidelines of the press conference for Lawyer’s Day, which has been organized by the association.
Previously, the Legislative Assembly Electoral Affairs Committee (CAEAL) deemed that signing nomination for a potential candidate implies political representation, which may violate the duty to political neutrality of part of the civil servant team.
When questioned about this interpretation, Valente affirmed the civil servants’ duty of political neutrality at work, while stressing that he was speaking only for himself.
“Because they work to serve the population – all the residents of Macau – and not a particular one,” the experienced legal professional explained. “[When they perform their duties,] they cannot take sides. They should not like or dislike a particular resident because they think differently.”
As for nominating a candidate, in contrast, the lawyer thinks civil servants should be allowed to do so.
“I don’t think there is any law that forbids public servants from proposing candidates [or] signing [nomination forms],” Valente pointed out. “I don’t know any law that says that.”
While considering it legitimate for civil servants to nominate candidates in the parliamentary election, the veteran lawyer has the opposite view when it comes to campaigning for a candidate.
“I think it desirable that civil servants do not get involved directly in pushing for one side or the other,” Valente said, confirming his stand against civil servants campaigning for a candidate or taking a position in a candidate’s campaign.
On earlier occasions, the Macau Civil Servants Association has revealed that some workers in the public sector were told not to sign nominations for any candidate. The Civil Servants Association found this to be a denial of civil servants’ rights in election.
Meanwhile, the CAEAL has expressed the view that civil servants, while they are not at work, “have the rights to participate in [an] election to a certain extent,” although the scope of that participation has not been described.
In a statement issued by the CAEAL on April 30, the entity affirmed that certain public sector workers governed by special laws and regulations, such as judges and law-enforcement officers, should remain politically neutral.