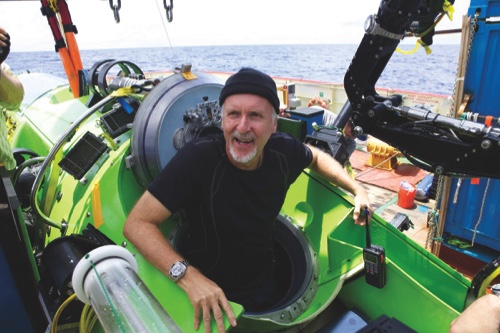 The giant, inflatable whale in this Gulf Coast city signals not only the arrival of one of the world’s biggest documentary festivals, but also the emergence of film as a way to tell the story of climate change.
Once perhaps relegated to National Geographic and PBS features, environmentally conscious narratives have gone Hollywood. Director James Cameron and deep-sea explorer Fabien Cousteau have made their own real-life sagas, the types of documentaries that are the focus of the Blue Ocean Film Festival here. But the issues they bring to life are also finding their place on the big screen.
“Cli-fi” movies have emerged as a niche genre, taking the pomp of doomsday science-fiction flicks and mixing it with the underlying message of environmental awareness. The latest example being released Friday, “Interstellar,” is a USD165 million space-time saga about a last-ditch effort to find humans a new home in another galaxy. The film takes place in the near future after Earth has been ravaged by a blight that’s left many food sources extinct.
The Blue Ocean event is one of several eco-festivals that have sprung up in recent years, including the Jackson Hole Wildlife Film Festival in Wyoming and the Environmental Film Festival in Washington.
“This is a call to action,” said Debbie Kinder, the organizer of Blue Ocean. “It’s not just about whales and fish in the sea and beautiful beaches. It’s about humanity, it’s about generations. It’s about our future.”
Opening night led with James Cameron’s “Deepsea Challenge 3D,” about the filmmaker’s quest to dive 7 miles (11 kilometers) beneath the ocean’s surface into the Mariana Trench.
Fabien Cousteau, the grandson of famed French oceanographer Jacques Cousteau and a filmmaker himself, said that so-called cli-fi movies allow people to view a changing part of the world through the prism of an anecdote. “It’s relating the scientific part of the story in a way that people are entranced by it,” he said.
Earlier in the summer, Cousteau and a team of filmmakers and scientists dove 19 meters below the ocean’s surface in the Florida Keys to study what effects climate change and pollution are having on a coral reef. He documented the 31-day underwater living experiment in a film, which was shown at the festival.
Documentaries are powerful, but feature movies with film stars and vivid storytelling are also pieces of the equation, said Dan Bloom, the activist credited with coining the “cli-fi” term.
Bloom cites “Soylent Green,” the 1973 science-fiction film depicting a dystopian Earth coping with the ravages of overpopulation, as an early example of “cli-fi.” Now, he hosts an online festival called the Cliffies that recognizes movies focused on climate change. Among the winners this year: Darren Aronofsky’s “Noah” and the South Korean film “Snowpiercer,” which centers around a perpetual-motion train smashing through ice and snow in a futuristic, Ice Age-landscape. Tamara Lush, St. Petersburg, AP