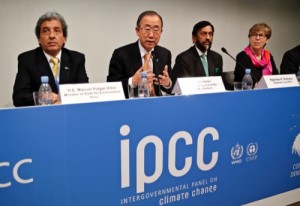 Presenting a report on climate change, with from left, Minister of State for Envionment of Peru Manuel Pulgar-Vidal, UN Secretary General Ban Ki-moon, Chairman of the IPCC Rajendra K. Pachauri and Secretary of the IPCC Renata Christ

Climate change is happening, it’s almost entirely man’s fault and limiting its impacts may require reducing greenhouse gas emissions to zero this century, the U.N.’s panel on climate science said Sunday.
The fourth and final volume of the Intergovernmental Panel on Climate Change’s giant climate assessment offered no surprises, nor was it expected to since it combined the findings of three reports released in the past 13 months.
But it underlined the scope of the climate challenge in stark terms. Emissions, mainly from the burning of fossil fuels, may need to drop to zero by the end of this century for the world to have a decent chance of keeping the temperature rise below a level that many consider dangerous.
The IPCC did not say exactly what such a world would look like but it would likely require a massive shift to renewable sources to power homes, cars and industries combined with new technologies to suck greenhouse gases from the atmosphere.
The report warned that failure to reduce emissions could lock the world on a trajectory with “irreversible” impacts on people and the environment. Some impacts already being observed included rising sea levels, a warmer and more acidic ocean, melting glaciers and Arctic sea ice and more frequent and intense heat waves.
“Science has spoken. There is no ambiguity in their message. Leaders must act. Time is not on our side,” U.N. Secretary-General Ban Ki-moon said at the report’s launch in Copenhagen.
Amid its grim projections, the report said the tools are there to set the world on a low-emissions path and break the addiction to burning oil, coal and gas which pollute the atmosphere with heat-trapping CO2, the chief greenhouse gas.
“All we need is the will to change, which we trust will be motivated by knowledge and an understanding of the science of climate change,” IPCC chairman Rajendra Pachauri said. Karl Ritter, Copenhagen , AP