Columnist and newspaper cleared of slander, but fined 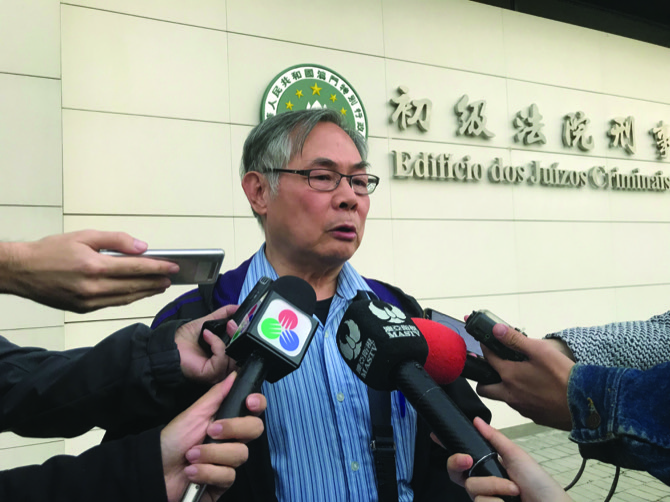 However, although the two individuals and the newspaper were found not guilty of slander, the columnist, together with the newspaper and Chao Chong Peng, still need to pay a total of MOP50,000 to Polytec as compensation.

According to the presiding judge of the court, Chao Im Peng, Lei Kong’s more than 25 columns, which featured the Pearl Horizon incident, damaged Polytec’s image. That’s the case even though the court could not see any intent to harm Polytec in Lei’s articles.

The judge remarked that Macau’s law protects both freedom of speech and the freedom of press, and that, at the same time, Macau’s law also protects individuals’ dignity and reputation.

“News reports should respect the principle of proficiency. At least, [the writers] should seek proof of factuality of the source, and [the writers] can’t speculate facts based on some [other] facts,” said Chao, who also noted that “freedom of press is not the same as freedom of speech.”

The judge noted that freedom of press highlights factuality and objectivity, and that freedom of speech is also restricted as speech has to respect human rights and others’ dignity and reputation.

“Macau residents have the right to judge the reports and the facts. [… Although] residents were not necessarily influenced by the articles, they have caused a certain level of negative acknowledgement of the residents towards Polytec, and have damaged Polytec’s image,” said Chao.

In the judge’s opinion, Lei did not write the articles out of spite, however, “as a professional commentator, [Lei] should not comment easily without proof,” said Chao.

Besides the MOP50,000 compensation to Polytec, the defendants will also need to cover the costs of the civil litigation, as well as the interest on the compensation starting from the day of the verdict until the final installment.

The defendants were given 20 days to decide whether to appeal.

On the sidelines of the court, defendant Lei Kong told the media that he would appeal.

“As far as I know, in Macau’s history, nobody has ever been charged for slander […] because of a public affair. This incident reflects what other places always say about Macau’s law: that it is lagging behind and that its judicial system is falling and corrupted,” Lei told the media. “In the past, I never believed [what other places said about Macau]. But having gone through today, I believe it. It is really ridiculous; far more than just being ridiculous.”

“This lawsuit has turned a new page for Macau,” said Lei.

In addition, Lei questioned the protection of Macau’s freedom of press. He accused the court of not having taken account of the details of the Pearl Horizon case, having instead only considered the content of his articles.

“If I can’t win the lawsuit once I appeal, then of course, I will not dare to write articles in the future. Thus, how can we talk about freedom of the press?” Lei questioned.

After the announcement of the verdict, the Macao Journalists Association expressed that it respected the verdict, but did not approve of it.

The Son Pou columnist wrote a series of articles, including eight feature stories, which featured comments on the Pearl Horizon case. After Son Pou published Lei’s 27th Pearl Horizon story, the columnist received a lawsuit notice from the court.

Polytec’s accusation identifies eight defamatory articles written by Lei Kong. In these articles, Polytec found that Lei Keong’s expressions included the words “fraud” and “trap”, as well as other accusations and allegedly defamatory statements about the company. In particular, Lei depicted the Pearl Horizon contract with buyers as being “arbitrary”, a “trap”, and that it was a “suspected fraud”.

Previously, during the last trial session, Chao expressed that “Polytec probably did not want to solve the issue [concerning the articles], but the company is systematically making plans for other purposes.”

In Chao’s opinion, Polytec’s loss of reputation is mainly due to the failure of the company to deliver the residences on time, and because of that “the media should not be held accountable for it.”