Commercial spaces that cater to domestic market growing, even as tourist shops close 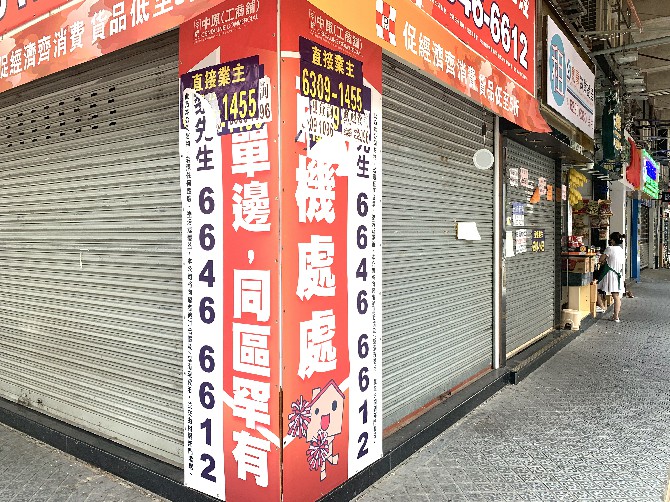 Some retailers whose business comes primarily from the local market have actually expanded their commercial spaces amid the Covid-19 pandemic, contrary to the experience of those retailers who primarily serve tourists. The latter group are seen closing in some districts of the Macau SAR after months of near-zero revenue.
That comes as the city is on track to record an economic contraction of up to 70% this year, according to some estimates.
Commercial spaces in the local market have remained “healthy and stable,” according to real estate agency Ambiente Properties, particularly those located in Avenida Horta e Costa, the Three Lamps District and the Taipa area.
Retail stores in these particular areas largely cater to local consumers, whereas many commercial spaces in the city center and ZAPE district have already closed, with a substantial number up for lease already.
Thanks to financial assistance distributed by the government to local SMEs and residents, some operators have taken up more commercial spaces. Spending by local residents using consumption vouchers reached 1.46 billion patacas in total in the past two months, and 70% of total spending went to the retail and supermarket sector.
“We see a few operators expanding their businesses. For example, snacks businesses have expanded to other store locations, and beauty stores taking additional 8,000 square feet in Grade A space,” said Suzanne Watkinson, managing director of Ambiente and a Macau real estate consultant.
“In the local areas, if some long term tenants find their business lagging, then the landlord will allow them to divide the space and sublet.”
Speaking to the Times, Watkinson said that subletting a space was a win-win situation for both the tenants and landlords, as landlords could not afford to lose tenants in these trying times.
The rental prices of these commercial spaces has remained stable, as the current market situation cannot be “too aggressive.”
However, commercial spaces selling products and services to the city’s tourists are experiencing a different reality.
Businesses reliant on tourist spending are facing a tough time as tourists arrivals continue to drop due to travel and border restrictions.
Currently, all foreign tourists, as well as blue card holders, are still barred from entering Macau as part of the city’s infection control measures.
The tightening of quarantine measures for arrivals in Macau starting in late March 2020 caused the number of visitor arrivals in April to tumble 99.7% year-on-year to just 11,041. This affected local businesses that are heavily reliant on tourism.
According to Ambiente, retailers – particularly in the Senado Square area – have been calling for rent reductions due to the lack of customers.
These commercial spaces include those that are proximate to China Plaza, where many travel agencies are located.
“We’ve seen a lot of stores closed in those area. Why? Because they all target tourists and not the domestic market. Four to six of the travel agents have closed,” said Watkinson.
“One of our clients was a travel agent for long time [and they have] closed. It’s understandable, because they don’t have any business. The pharmacies geared towards tourists are closed, as well as gold jewelry shops. Instead of having 20 [of branches] open, they have reduced it.”
Watkinson added that many commercial spaces in the city have been closed for three months, implying that the closures were directly due to the impact of Covid-19.
Ambiente said that it is optimistic about office spaces, however, as the majority of companies renting the spaces are SMEs which are mostly fully supported by government policies.
“The demand for office space remains stable, and with limited supply, rents remain stable,” said Watkinson.
However, the real estate agency noted some downsizing by larger international firms, with some back-office space being cut by 50%. Some centralizing and outsourcing services by international companies are now being handled by their offshore headquarters, leading to a reduction in the required office space.
“[In terms of] rentals of Grade A offices, these are controlled by a few owners and as there’s little supply, they are able to maintain their rents on the high side, [while] rents of Grade B office space in NAPE area are stable but open for negotiation,” Watkinson said. She added that landlords are keeping face value high but are offering a greater rent-free period.
For now, companies based locally are also awaiting the re-opening of borders, particularly from the SAR’s top source market, and for the city’s economy to return to normal.