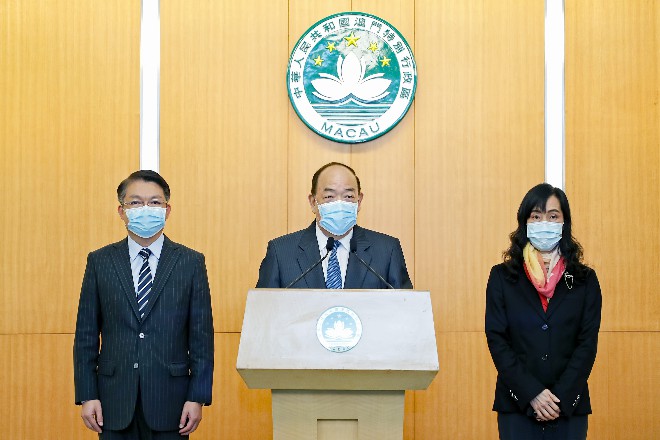 The number of confirmed coronavirus patients has increased to 10 after two more were reported in the latest government update. Leong Iek Hou, a coordinator at the Health Bureau (SSM), publicized the itineraries of the two most recent cases during yesterday’s press briefing.
The ninth patient is a 29-year-old local woman, who works in the floristry department of the Galaxy Macau property.
She went to Zhuhai for hotpot and an orchestra concert on January 19 and returned to Macau the same day. She worked between January 20 and 22, commuting on employee shuttle buses.
On January 23, she spent an hour at the house of the eighth patient, who is her aunt. She then had dinner at the house the next day, but not with the eighth patient.
She developed a fever on January 25 but later recovered. On February 3, she approached the Conde S. Januário Hospital seeking medical assistance because of a mild runny nose. She was later diagnosed with the coronavirus.
The tenth case involves a 56-year-old casino shuttle bus driver who works with casino operator Sociedade de Jogos de Macau (SJM). He visited Guangzhou briefly on January 25 with his family, in a group of seven people, in a chartered car.
He gradually developed various symptoms and visited several medical facilities for consultation, one of which was a private doctor. However, he was not tested and confirmed as the tenth patient in Macau until yesterday morning.
Both patients reside in the Areia Preta District, one near the power plant in Macau and the other near Baptist Secondary School. The Municipal Affairs Bureau has already sanitized the area around the two buildings.
During her incubation period, the ninth patient dined twice with three colleagues at the canteen in her workplace, in addition to taking employee shuttle buses to and from work. This may pose a great risk to workers within the complex, but the SSM ascertained that infection control measures have been taken.
“We quarantined the three colleagues having been in close contact with the patient,” explained Leong, noting that one of the three colleagues has returned to their residence in Zhuhai. As such, the quarantine measures will be handled by the authorities there.
“Furthermore, the casino operator has been notified. It is instructed to ask its team members to conduct self-monitor[ing],” Leong added.
On measures to assist small and medium-sized enterprises in crossing this hurdle, Secretary for Economy and Finance, Lei Wai Nong, reiterated the importance of fighting the outbreak.
“Our first priority is to handle the epidemic well,” said Lei. “This crisis is not only affecting the tourism or the gambling industries. It is now affecting all walks of life.”
Being the policymaker for economic and financial matters, the secretary made it very clear: “Our responsibility to support the local economy is unquestionable. We will expand investment and lower taxation.”
The secretary did not go into detail regarding his proposals, saying only that it was still too early to talk about recovery measures. “Faith will make everything possible,” he said.
In order to calm students, parents and teachers, the Education and Youth Affairs Bureau (DSEJ) has launched a new website which is dedicated to providing mental health support if any problems have arisen during the holiday extension period or the epidemic.
It is also working with associations to provide hotlines facilitating phone counseling services. Nonetheless, only six inquiries have been received so far.
Kong Ngai, head of the Bureau’s education department told the press conference specifically that his bureau “hereby strongly reminds students [living on the mainland] should stay in their homes in Zhuhai,” in response to parents of these students calling to ask if their children should return to Macau.

Man under investigation for spitting on mask stocks

A man is under police investigation for spitting on a pile of more than 300 masks at the Seac Pai Van Health Center after refusing to queue and remain orderly while requesting to get his masks exchanged, Lei Chin Ion, director of the Health Bureau (SSM) revealed yesterday at the government’s daily press briefing on novel coronavirus measures.
The health authority head, however, did not disclose whether the individual concerned was a local resident or a foreign worker.
A spokesperson for the Public Security Police Force (PSP) told the press conference that an investigation is now underway. If sufficient proof is gathered, the suspect will be charged and passed on to the Public Prosecutions Office.
On Monday, the suspect bought his share of masks at an office of the Women’s Federation. He was not satisfied with the quality of the masks, so he approached the Health Center for an exchange.
However, he refused to line up and had a brief altercation with the officers working there. Then, he yelled “Let’s die together!” in Chinese and spat on a pile of masks. As a result, the SSM had to void the pile of masks. Lei strongly condemned any such acts. AL