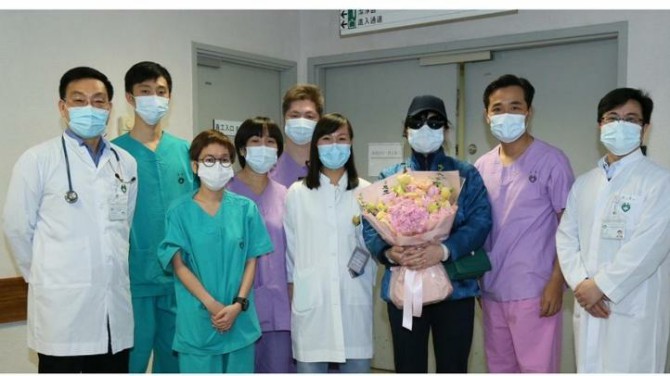 The first confirmed coronavirus patient in Macau was discharged from hospital yesterday after more than two weeks of treatment.
The 52-year-old businesswoman from Wuhan arrived in Macau on the morning of January 19 and had stayed at the Landmark Hotel for two days before checking herself into the hospital.
Announcing the news yesterday, the Health Bureau’s (SSM) director, Lei Chin Ion, boasted that “it was the effort of the entire government.”
“The patient’s recovery has given us greater confidence in winning the battle [against the virus],” said Lei.
During yesterday’s press conference, a video was shown of the cured patient thanking the SSM for their treatment. She said that when she was first diagnosed, she was so worried she made a call to her daughter, leaving a verbal will.
However, she commended the quality of medical care in Macau, saying that “it is much better than in the mainland.” She also said that “having come to Macau is the luckiest thing [she] has ever done.”
Some journalists were concerned about how the bill for her care would be paid. The SSM director explained that the patient’s bill amounted to MOP34,000. A waiver mechanism is available, which the patient has applied for. Her application is under review. Under the mechanism, she may or may not be able to enjoy a full or partial waiver.
The Bureau explained that in most of the cases in Macau, the patients’ conditions were mild during the first week of treatment, worsening during the second week, before showing signs of recovery in the third week.
Following the guidelines of the National Health Commission, the SSM deemed that the patient had recovered and discharged her. The guidelines stipulate that if a patient has been afebrile for at least three consecutive days, has an improved respiratory condition, an obvious improvement in pneumonia symptoms and two negative throat swabs in three days, then they have recovered.
The SSM was also notified by their Hong Kong counterpart about 15 Macau SAR passport holders and three Portuguese passport holders now stranded on the World Dream cruise ship that is currently berthed in Hong Kong.
According to the SSM, they all have undergone testing with negative results for the virus. None of them have developed any symptoms, but they are now under medical observation.
The cruise ship has been cordoned off because it sailed four times after allowing eight mainland Chinese passengers infected with the disease onboard. Almost 4,000 people are now trapped on the ship.
At Wednesday’s press briefing, the SSM revealed that two Macau passport holders are quarantined on the Diamond Princess cruise ship, another vessel, which is now being held at sea near Yokohama, Japan.

Four hotels, namely the Four Seasons Macao, The St. Regis Macao, Conrad Macao and the Grand Harbour Hotel, have temporarily shut down due to the novel coronavirus outbreak, revealed the Macao Government Tourism Office (MGTO) at yesterday’s government daily press briefing.
When asked about why the hotels had suspended their operations, the MGTO explained that it was their own commercial decision. Some of the hotels, according to the tourism regulator, reported low occupancy rates after the outbreak. The hotels notified the regulator once they decided to suspend services, the MGTO added. AL