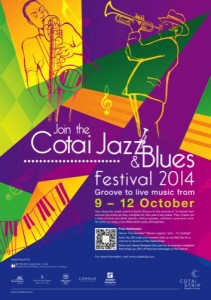 The Cotai Jazz & Blues Festival 2014 is coming back for its third year at The Venetian Macao’s outdoor lagoon area Oct. 9-12, 2014, featuring the return of the international Jazz & Blues competition. Admission is free.
Once again supported by the Cultural Affairs Bureau of the Macau S.A.R. Government, the Cotai Jazz & Blues Festival is a celebration of live international music, entertainment, bead throwing and food in the spirit and style of New Orleans’ Mardi Gras. English rising jazz star Anthony Strong, plus champion Bleu Rascals and one of the finalists Andy Frasco and the U.N. from last year’s festival will also offer jazz performances.
Adding to the fun this year is a second stage, floating in the lagoon area, and an additional chill out area, along with many food and beverage options and an expanded seating area.
This year, more than 180 applications from all over the world were received for the Jazz & Blues competition, and 12 finalists will vie for a share of the HK$550,000 cash prize pool by putting up live performances at the main stage at the outdoor lagoon area. 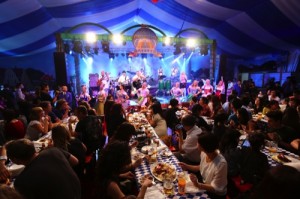 MGM Macau is bringing its sixth Oktoberfest to town. This time, MGM is hosting the event in cooperation with the Macau Government Tourist Office, the aderal Republic of Germany in Hong Kong and the German Macau Business Association from October 15 to 25.
With the increasing number of guests received each year, MGM has specially expanded the Oktoberfest floor space by setting up VIP cabanas in the poolside area to provide a more private experience.
This eleven-day beerfest captures Bavarian festivities through authentic German beer, live entertainment and a party atmosphere. Furnished with long wooden tables and benches under a 25-meter-
long tent, the venue is open every day from 6pm till midnight. Traditional accordion and oompah music, ceiling wreaths and buntings, taps flowing with Spaten beer, carnival game booths, folk dancing and sing-
alongs are all part of the fun. Featuring the Högl Fun Band, flown in from Germany, plus beer maids in dirndls, MGM’s Oktoberfest reflects exactly what you would find in Munich.
Over the years, MGM has already received more than 55,000 guests and served 51,186 liters of beer, 11,282 kilograms of pork knuckles and 4,650 meters of sausage; yet this year’s Oktoberfest promises to be even bigger.