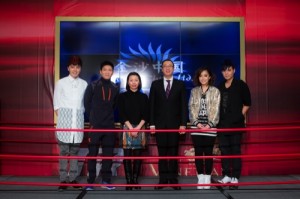 The music video for the new song “Get Ready” was officially launched at The Venetian Macao yesterday. Produced by Macao singers Hyper Lo, Adriano Jorge and Josie Ho, the song is inspired by boxing events that have been held at the integrated resort. Sands China Ltd. took the initiative to fully support the production of the song and music video by the three local artists. The trio of singers will perform “Get Ready” live for local boxer Ng Kuok Kun as he walks to the ring for his upcoming fight at the Clash in Cotai II at the Cotai Arena Nov. 23.
A group of fans and onlookers gathered yesterday to enjoy the debut of the music video and were treated to a live performance of the song by Lo, Jorge and Ho across from the foyer of The Venetian Theatre.
“Sands China is very happy to sponsor the production of such an inspirational song – one that we hope will encourage the younger generation to go for their dreams,” said Melina Leong, Senior Vice President of Public Relations and Community Affairs for Sands China Ltd. “We are proud to continue our contribution to the development of the local creative industry.” 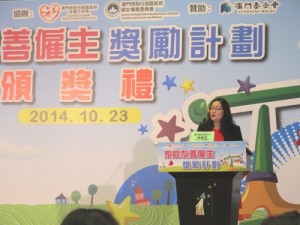 Organized by the Women’s General Association of Macau, co-organized by the Social Welfare Bureau and Macau Women’s Commission, the “Family-Friendly Employers Award Scheme” was successfully concluded in October. With CTM’s efforts in actively promoting family-friendly policies and measures to assist staff members to achieve a balance between work and family, the Company was recognized by the judging panel, resulting in it being awarded the “Excellent Family-Friendly Employers Award”. CTM was the only telecom operator presented with this prize in Macau. The accolade reflected CTM’s efforts to promote a balance between work and family.

SJM Theodore racing ‘thrilled’ to get title defense under way 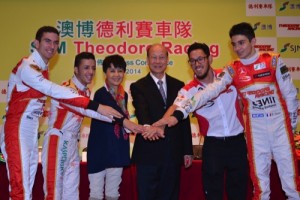 Sociedade de Jogos de Macau and Theodore Racing officially addressed the media at the Grand Lisboa. Attending the press conference were Dr. Ambrose So, Chairman of SJM’s Board of Directors, Ms. Angela Leong, SJM’s Managing Director, Mr. Teddy Yip, Jr., Team Principal of SJM Theodore Racing, and the team’s three drivers Esteban Ocon, Antonio Fuoco and Nicholas Latifi.
Following last month’s announcement that SJM had signed as title sponsor and official partner to Theodore Racing for this year’s event, the two parties expressed excitement about returning to the Grand Prix following the team’s success in winning last year’s 60th edition.
Dr. Ambrose So said, “We are thrilled to again sponsor the team that won last year’s Macau Grand Prix, reflecting our longstanding support for this event and our historical relationship with Theodore Racing.”
Ms. Angela Leong added, “The Macau Grand Prix is a signature event for Macau’s tourism calendar, and SJM is proud to play an important role through our sponsorship of the SJM Theodore Racing Team.”