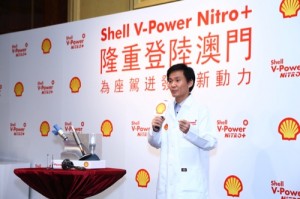 Shell announced the launch of its new performance fuel, Shell V-Power Nitro+, in Macau yesterday. Shell V-Power Nitro+ is the result of Shell’s latest fuel technology, which aims at enhancing the performance of car engines.
Shell V-Power Nitro+ is one of the many technical projects that Shell collaborates on with Ferrari, and has gone through Formula One testing conditions to produce a fuel that resembles 99% of Shell’s Formula One race fuel.
In celebration of the launch of Shell V-Power Nitro+ in Macau, Shell Hong Kong Limited held a launch event at MGM Macau. Ms. Anne Yu, Retail General Manager of Shell Hong Kong Limited for the Hong Kong and Macau market said, “Shell strives to innovate and seek breakthroughs in the field of scientific research to satisfy the demand in quality fuel from customers and their cars. The technical partnership with Ferrari brings precisely the unprecedented superiority of Scuderia Ferrari Formula One race fuel to drivers. Shell V-Power Nitro+ has been highly acclaimed by Hong Kong drivers since its successful launch in Hong Kong last year. Today, Shell brings this premium high performance fuel to Macau, so Macau drivers can also enjoy the exceptional driving experience.” 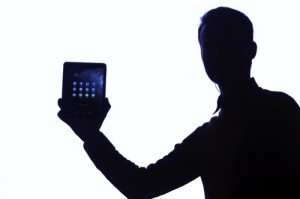 Nokia is back in the fray. Just months after selling its ailing handsets unit to Microsoft, the Finnish company is planning to bring its brand back to consumers with a new tablet.
This time the device operates Android instead of the Windows software that Nokia adopted on its cellphones when it started a strategic partnership with Microsoft in 2011.
Sebastian Nystrom from Nokia’s technologies unit said yesterday that the former global mobile phone leader was “pleased to bring the Nokia brand back into consumers’ hands.”
Using Android, he said, will give Nokia access to some 80 percent of the world’s mobile consumers compared with just the 2.5 percent who use the Windows mobile devices.
Five months after completing the purchase of Nokia’s handsets, Microsoft last week unveiled its first Lumia smartphone under its own brand name. The company has released a few Lumia models since it bought Nokia’s phone business, but those models still carried the Nokia brand.
Since the USD7.2 billion sale of its mobile phone unit, the slimmed-down Nokia has become much more profitable thanks to its three remaining operations: networks, HERE mapping services and software.
It is one of the few computerized roadmap providers in the world and the only one with a long history of working with automotive companies. HERE has an 80 percent market share for embedded automotive maps.
Nokia said that the 7.9-inch N1 tablet will first be available in China in the first quarter of 2015 with an approximate price tag of $250, before being introduced to other markets.
After the announcement, the company’s share price was up more than 1.6 percent at 6.31 euros.