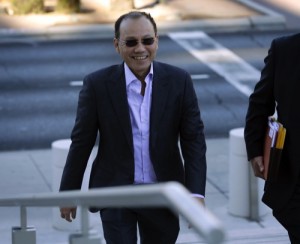 A federal judge in Nevada heard defense attorneys allege Thursday that the FBI improperly enlisted Caesars Palace officials to obtain a crucial search warrant before arresting eight men now charged with setting up an international Internet gambling hub at the Las Vegas Strip resort.
The arguments in U.S. District Court in Las Vegas didn’t lead to the public airing of evidence that FBI agents with lapel cameras tricked their way inside a luxury villa by getting a contractor to shut off Internet access to the suite and then impersonating repair technicians. The Associated Press previously obtained and viewed that video.
Instead, Caesars attorneys sought to throw out the subpoena requiring the surrender of email and business records that defense attorneys say will show the FBI violated the defendants’ Constitutional protections against unreasonable search and seizure.
U.S. Magistrate Judge Peggy Leen heard about 40 minutes of arguments before declaring she wouldn’t throw out the subpoena. The lawyers met separately and reached a deal a short time later that made no more hearings necessary.
Attorney Vincent Savarese, representing Caesars, said they agreed on a “narrowed scope” of disclosures.
David Chesnoff, attorney for lead defendant Wei Seng Phua (also known as Paul Phua), said that by receiving the documents, “we’ll be able to pursue the truth.” The lawyers didn’t disclose details.
Defense attorney Thomas Goldstein told the judge they think emails will show Caesars officials were “centrally involved” with federal investigators and prosecutors trying to find a way to obtain enough probable cause to get a search warrant against Wei Seng Phua.
Monica Pinciak, a lawyer representing Caesars, said the casino company had nothing to hide. She said it already turned over business records relating to money transfers, and branded the subpoena a “fishing expedition” for emails and materials that could be used to hurt the company.
Phua, his son Darren Wai Kit Phua, and defendants Seng Chen Yong, Wai Kin Yong, Hui Tang, Yan Zhang, Yung Keung Fan and Herman Chun Sang Yeung were arrested in three exclusive villas at Caesars on July 13. Each has pleaded not guilty to charges of transmission of wagering information, operating an illegal gambling business and aiding and abetting.
If convicted, each could face up to seven years in federal prison on the unlawful transmission and illegal gambling business counts, and fines of up to USD500,000.
Phua also faces charges of running an illegal sports gambling business in Macau. He was arrested there June 18 and freed on bail. He flew a few days later to Las Vegas, where federal authorities impounded his private jet pending resolution of the U.S. case.

phua: a driving force ‘behind the nosebleed cash games in macau’

The Las Vegas Review-Journal reported that Paul Phua is a frequent visitor at Las Vegas poker tables. In 2012, he played in the “Big One for One Drop,” a USD1 million buy-in event that also served as a charitable fundraiser for the One Drop water awareness foundation. According to World Series of Poker press material, Phua is “a big league investment banker from China who is one of the driving forces behind the nosebleed cash games in Macau.” Ken Ritter, Las Vegas , AP