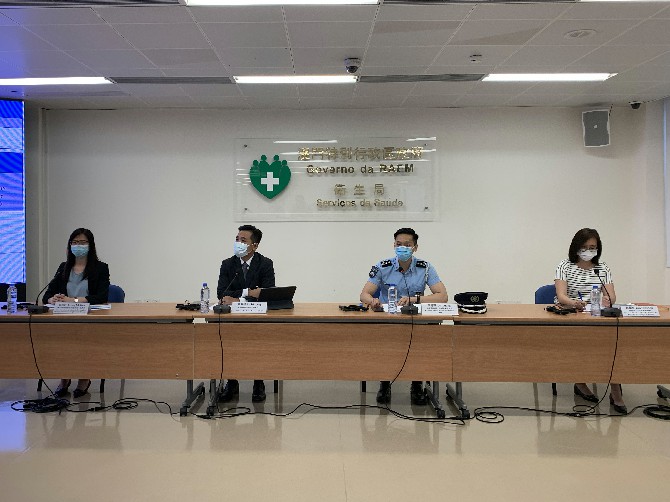 Local health authorities are calling on the population to be vigilant and redouble their enforcement of all Covid-19 prevention measures.
The call comes after the report of new cases of the disease in the neighboring areas – namely the cities of Guangzhou and Foshan in Guangdong province, the Novel Coronavirus Response and Coordination Center has stated.
Authorities have expressed serious concerns over the possibility of a resurgence of the virus in areas where the “preventive measures are reduced,” noting what they have learned from the “experiences around the world.”
Urging the population to take extra care, the center also noted “as long as preventive measures are strictly followed, the [virus] transmission chain can be reduced or even interrupted.”
“In many provinces and cities in mainland China, especially in the city of Guangzhou in the province of Guangdong, and other places have come to be considered medium risk areas. [Areas] from where a large number of people normally travel daily to and from Macau. In this sense, all citizens, tourists, various services, institutions, associations, and companies are urged to strengthen prevention and actively cooperate with the vaccination plan against the new type of coronavirus,” the center stated.
“The situation in the Guangdong province deserves added attention as it has a very close relationship with Macau. There is a high daily flow of people between the two sides, which can have a great impact on Macau,” they added.
To prevent the contagion, health authorities are urging the whole population to “strictly comply with the anti-epidemic guidelines issued by the Macau SAR government.” These include: frequent temperature measurement, Health Code verification, wearing masks, maintaining social distance, and paying attention to personal and environmental hygiene.
Additionally, the authorities are now also calling on residents to avoid traveling to regions where there are outbreaks reported, as well as to take the vaccine against Covid-19 as soon as possible.
The same authorities are also urging public services, institutions, associations, and companies to “actively adopt measures to encourage, cooperate and support their workers to get vaccinated as soon as possible.”
The center also advises public and private entities alike to reconsider hosting “group activities that are not essential.”
The same health authorities have amended on Saturday (May 29) evening, the restrictions to be imposed to people arriving in Macau and that had been in: Hailong Sub-District (including Zengjiao Community, Haibei Community, Longxi Community, Longwan Community, Dahe Community, Jiangbei Community), Liwan District, Guangzhou City or Huafu Yushui’an Small Community, Guicheng Sub-District, Nanhai District and Foshan City.
People arriving from such locations are now being subject to quarantine measures for a period of 14 days.

The results of the nucleic acid test (NAT) was negative for a Macau resident who was in Guangdong Province, where he made contact with an individual who was diagnosed with an asymptomatic infection.
Though no symptoms until now, considering the risk of infection, he is under observation at the Clinical Center of Public Health of Coloane.
According to the information available, the local authorities were informed of this early Saturday morning. They immediately traced the resident and put him under observation.
Mainland authorities claim that this man was in close contact (less than three meters away) with the diagnosed Covid-19 patient on May 23, while visiting the Gulong Gorge tourist area located in the Xin District of Qingyuan city.
According to the latest update available, the local resident is a 59-year-old man that works as a VIP car driver at the City of Dreams Casino.
He was at Qingyuan in a tour group organized by a Zhuhai travel agency that toured the area from May 22 to 23.
Records show that the man has been inoculated with the first dose of a Covid-19 vaccine on May 25 in Zhuhai and following that, he had been submitted to two NATs, both with negative results.
The man also claims to have worn a face mask when traveling and at work between May 27 and 29.
In a statement released last night, the center said that it is following up on 31 individuals who have also been in close contact with the infected person. RM