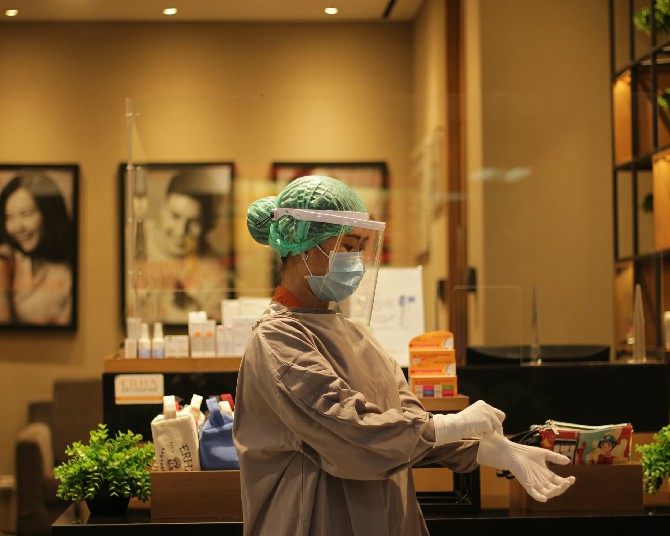 The director of the Health Bureau (SSM), Dr. Alvis Lo, has urged the population to return to high alert mode and “raise the guard once more” against Covid-19.
The appeal was made at the weekly press briefing from the Novel Coronavirus Response and Coordination Center yesterday and comes after the resurgence of new cases of the disease in several neighboring cities and regions.
“There was a surge of cases in the community in Guangzhou and Shenzhen, as well as a new outbreak in Taiwan. These include variants of the disease, so we need to have this capacity of being able to think of the hardship in relatively peaceful times and complete the vaccination [process] as soon as possible,”
Lo said, “I also urge the institutions, entities, and all social sectors to strictly observe the measures against the epidemic. People feel that Macau is very safe and many of them have ‘lowered their guard’ which is dangerous.”
He alerted the population to the fact that the outbreaks that occurred in the neighboring regions could also reach Macau and that everyone should be vigilant and prepare for preventative measures.
Lo noted that there were recently several events organized that included a high number of participants in which some regulations were not observed, such as the request that all participants undertake Nucleic Acid Tests or be vaccinated.
The director of the SSM also said that the health authorities are also aware that there are several cases of breaches of the preventive measures such as failures to take or taking inaccurate body temperature readings in public areas with a high density of people or the exemption of presentation of a valid green health code.
Lo noted, “Once a case is confirmed in the community in Macau, this will cause a major disruption to the daily life of the population as well as surely affect the [current] convenience of the border crossing into the mainland,” he warned.
For the health authorities, the main concerns continue to be a “low rate of vaccinated people in the community, that does not ensure an immunity barrier,” he said, urging the population to get the vaccine “with urgency.”
Citing the latest figures, Lo noted that the over 150,000 doses of the vaccine already distributed in Macau cover barely 13.3% of the population, a rate that is considered very low and is a limitation upon the government’s plan to ease restrictions.
“We are far from reaching an immunity barrier in the community, so I urge everyone to get vaccinated as quickly as possible. The vaccination is an urgency and a need,” he remarked, noting that if there is an outbreak in Macau, there is not enough time to proceed with an emergency vaccination as the process and the period needed for the vaccine to have effectiveness is about six weeks.
Vaccination outreach
a positive factor
During the same press briefing, Tai Wa Hou, coordinator of the SSM’s Covid-19 Vaccination Operation, said that the vaccination outreach programs, namely those with the gaming concessionaires, are likely to have a very positive effect.
Tai noted that, for the time being, MGM Macau and Sands China will be the first operators to start vaccinations on-site, adding that in the case of MGM, the SSM hopes to vaccinate a total of 1,200 staff members, while in the case of the Sands, the figure will grow to around 2,000.
The coordinator of the vaccination operation also advanced that after that, two other operators will follow, namely Melco and SJM. According to Tai, this operation needs to be done in a phased manner as it requires many resources, complex logistics, and appropriate venues, confirming that the SSM has already negotiated with all the gaming operators and has already established a calendar for the vaccinations.
He also added that the outreach program within local universities would continue. A capacity expansion for the vaccination post of Kiang Wu Hospital is also ongoing, with the current capacity of 180 inoculations per day expanding to 270.

DSEDJ acknowledges requests from 1,450 students to return to Macau

A total of 1,450 Macau residents who are studying abroad have submitted requests to the Education and Youth Development Bureau (DSEDJ). The information was revealed by the representative of the DSEDJ to the Novel Coronavirus Response and Coordination Center press briefing yesterday, although no further information was provided regarding what authorities plan to do regarding these students.
The return to Macau of students currently pursuing education programs abroad has been one of the concerns resulting from the closure of Taiwan’s link in Macau’s connection to international flight destinations.