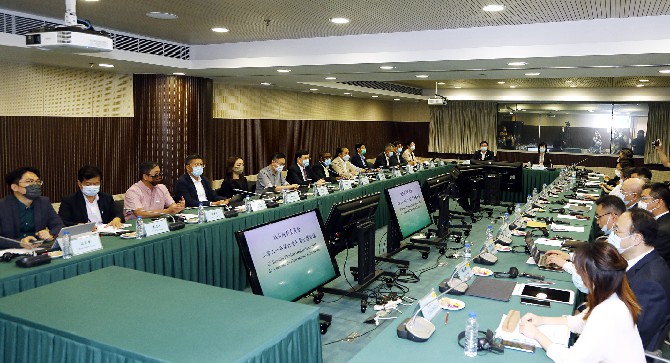 A total of 19 members of the Urban Planning Committee (CPU) submitted to the CPU yesterday their opinions on the draft of the Urban Master Plan.
In the sixth plenary meeting this year – a meeting dedicated to hearing the views of members and to questions for the government on the scheme – nine members presented their opinions on the plan.
The focus of discussion was upon the quantity and classification of some of the green areas of Macau, with several members presenting questions and suggestions on the matter.
Architects Omar Yeung and André Lui were two of the members most concerned about the issue.
Yeung called for more green areas and especially for the establishment in Macau of an emblematic city park comparable to Central Park in New York or Hyde Park in London, while Lui expressed concerns over the reclassification of locations such as Ka Hó as well as several other parts of Coloane as tourism development areas, redesigning ecological reserve areas as residential.
While Yeung wanted to use Zones C and D of the new landfill areas (at Taipa) to build the Macau Central Park, Lui noted the inconsistency of classifying areas where no construction is permitted as residential.
Yeung also called for the expansion of the use of columbarium areas and the inclusion of green burial land to preserve land for cemeteries and, at the same time, provide the region with more green areas.
Lui also showed dissent from the division of the Special Administrative Region into 18 intervention units or districts by the Plan, as well as their denomination. According to Lui, the zoning should respect historical factors and tradition to avoid a complete break from the past and with the collective memory of the people in Macau.

Responding to some of the questions raised on the creation and expansion of green and leisure areas, the representative of the Municipal Affairs Bureau (IAM) at the CPU stated that the government is already moving forward with the expansion of the South Coastal promenade.
The expansion aims to enlarge the outdoor space located south of the Peninsula and from which the first phase, linking the Macao Science Center and the Statue of the Goddess Kun Iam, was recently opened to the public.
“We will also coordinate with the Urban Master Plan and we are already preparing the design [for the second phase],” the IAM representative said, adding, “We hope we can also create a coastal promenade on the Zones B and C [of the new landfills at a later stage].” According to the same official, the new coastal areas, including Zone D of the new landfill sites, should add some 20 kilometers of new coastal promenade areas.