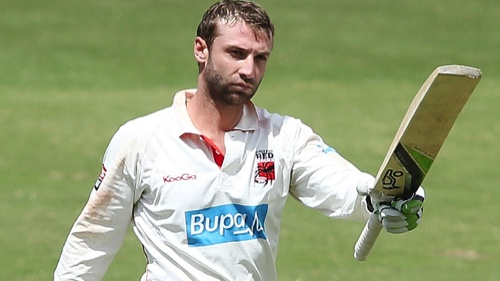 Australia batsman Phil Hughes had emergency surgery and was in a critical condition in a Sydney hospital after he was struck on the head by a ball during a domestic first-class cricket match yesterday.
Hughes, who was wearing a protective batting helmet, reeled back and then bent forward momentarily after the impact of the short-pitch delivery before falling suddenly to the ground. He was treated and ventilated on the field by medical experts, including doctors who were flown by helicopter onto the Sydney Cricket Ground, before being taken to nearby St. Vincent’s Hospital by ambulance.
Australian team doctor Peter Brukner said Hughes sustained a severe head injury.
“He subsequently underwent surgery and remains in a critical condition in the hospital’s intensive care unit,” Bruckner said. “Unless there is any significant change there will be no further updates on his condition until tomorrow [today].
“Phillip is receiving the best possible medical care. The thoughts of his teammates and the wider cricket community are with Phillip and his family and friends at this difficult time.”
The Sheffield Shield match between New South Wales, where Hughes was born and raised, and South Australia, where he now plays provincial cricket, was canceled.
South Australia Cricket Association high performance manager Tim Nielsen said the outcome of the surgery was unlikely to be known for one or two days, and he requested privacy for the Hughes family and friends who had gathered at the hospital.
The 25-year-old Hughes was considered a strong contender to force his way back into Australia’s test team next week if injured skipper Michael Clarke was forced out of the series-opening match against India. He was batting confidently on 63 when he mistimed an attempted pull shot and was hit on the back, left side of the head by a regulation bouncer from New South Wales fast bowler Sean Abbott.
Umpires and players rushed to help, and doctors were quickly on the field.
News of the accident was broadcast across Australia on TV and radio. Clarke went quickly to the hospital, where he joined Hughes’ mother and sister, who had been at the match.
Hughes has played 26 test matches for Australia since his debut in 2009 but hasn’t been able to cement a regular spot in the starting lineup. Australian and international players and officials were quick to react, sending messages of encouragement to Hughes via social networking sites.
“He is a great fighter and a great young man!” Australia coach Darren Lehmann posted on Twitter.
Australia opener David Warner, who was playing against Hughes yesterday, posted: “Thoughts are with my little mate Hughsy and his family. He is a fighter and a champion and he will get through this. Praying for you buddy.”
Cricket Australia chief executive James Sutherland said Hughes’ health was the main concern.
“His welfare is our highest priority,” Sutherland said. “We’re also naturally concerned about all of those involved in today’s game.”
Sutherland said he was shocked by the accident.
“It sends shudders through you a little bit … it makes a lot of things flash through your mind,” Sutherland told reporters in Melbourne. “All we know is that it’s serious and he’s fortunate to be in the best-possible place right now with experts all around him.”
Sutherland said Hughes had received messages of support from around the world.
“Everyone knows and understands the way he plays his cricket,” Sutherland said. “He’s fiercely determined, extremely proud of his achievements and I guess he’s a quiet achiever.
“He has the respect of all his teammates.”
Cricketers didn’t start wearing protective helmets until the late 1970s, when batsmen decided it was necessary to protect themselves against a 156-gram leather ball traveling at up to 160 kph.
Bouncers, where a fast bowler aims to push the batsman back toward the stumps with a ball that bounces above chest or head height, are still a regular and acceptable part of the game.
The International Cricket Council revised its laws on short-pitch bowling in the early 1990s, putting restrictions on the number of short-pitch balls allowed per over to stamp out bowlers merely using the delivery to intimidate batsmen. Top-level batsmen can combat the short-pitch balls by either taking the defensive approach of trying to duck out of the way, or take the risk of hitting it to leg-side to score runs. Keiran Smith, Sydney, AP