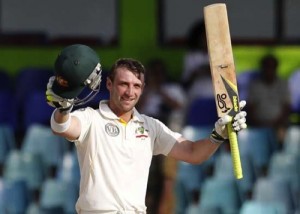 Phillip Hughes, the Australian batsman who needed emergency surgery after being knocked out by a cricket ball, remained in a critical condition yesterday.
Australian team doctor Peter Brukner issued a statement saying Hughes had further scans at St. Vincent’s Hospital during the morning and that his condition was unchanged from overnight.
The 25-year-old Hughes was batting for South Australia in a Sheffield Shield match against New South Wales at the Sydney Cricket Ground on Tuesday when he was felled by a sharply rising delivery that struck him behind the left ear.
He was treated on the field by medical experts, including doctors who were flown by helicopter onto the ground, before being taken to St. Vincent’s by ambulance.
“Phillip is receiving the best possible medical care,” Brukner said. Results of the operation are unlikely to be known for a day or two.
The SCG match was cancelled almost immediately and other Shield matches in Brisbane and Melbourne were called off yesterday after consultation between Cricket Australia and the Australian Cricketers’ Association.
Hughes was considered a strong contender to force his way back into Australia’s test team next week if injured skipper Michael Clarke was forced out of the series-opening match against India. Hughes was batting confidently on 63 when he mistimed an attempted pull shot and was hit in the head by a regulation bouncer from fast bowler Sean Abbott.
Hughes was wearing a batting helmet, but the area behind his ear was unprotected.
Images of the sickening blow were broadcast almost instantly across Australia, and messages of support flowed in from around the world all night and into the morning on Wednesday. News channels crossed lived to the hospital in downtown Sydney, where satellite TV trucks and dozens of news crews reported regular updates on Hughes’ condition.
Hughes has played 26 test matches for Australia since his debut in 2009 but hasn’t been able to cement a regular spot in the starting lineup. He was highly regarded by teammates and rivals, and regular fans who appreciated his no-fuss approach to the game.
The injury sparked debate about short-pitch bowling in the game, and the level of protection offered by contemporary helmets.
Cricketers didn’t start wearing protective helmets until the late 1970s, when batsmen decided it was time to protect themselves against a 156-gram hard leather ball traveling at up to 160 kph.
Bouncers, where a fast bowler aims to push the batsman back toward the stumps with a ball that lands halfway down the pitch and rears up above chest or head height, are still a regular and acceptable part of the game.
The International Cricket Council revised its laws on short-pitch bowling in the early 1990s, putting restrictions on the number of short-pitch balls allowed per over to stamp out bowlers merely using the delivery to intimidate batsmen.
Australian cricket great Shane Warne told an Australian radio station that the accident did not appear to be the result of a poorly designed helmet.
Adding some optimism to Hughes’ recovery hopes was Phil Simmons, a former West Indies batsman who recovered fully from a similar head injury and returned to test cricket. AP