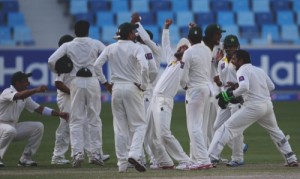 Pakistan picked up the last five wickets for eight runs in 7.3 overs after lunch yesterday to complete a 356-run win over Australia in the second test.
Australia was bowled out for 246 runs in the second innings while chasing a target of 603 runs at Sheikh Zayed Stadium.
The victory gave Pakistan a 2-0 sweep and takes them to No. 3 in the test rankings of the ICC. It was its first series win against Australia in 20 years, and also the biggest in terms of runs, beating the previous largest margin of 341 runs against India in Karachi in 2006.
Pakistan bowler Zulfiqar Babar added two wickets to finish on 5-120. He took 14 wickets in the series, the highest for both sides.
Leg-spinner Yasir Shah took three of the four wickets to fall in the post lunch session and finished on 3-44.
Pakistan had lost all the one-day international and Twenty20 matches before the series, and had lost its frontline spinner, Saeed Ajmal, to an ICC ban because of illegal action. The team also lost both its fast bowlers, Junaid Khan and Wahab Riaz, because of injury.
“We always had the belief, and which is why we delivered,” Pakistan captain Misbah-ul Haq said. “Things were looking difficult for us, especially as we lost Ajmal and then most of our regular bowling attack, but we fancied our chances because of how Australia struggled against our spinners and against India when they lost the series in the sub-continent.
“So, we knew if we could put up some decent totals, we could bowl them out. As it happened, it was a complete team performance and each member of the team contributed towards the team cause.”
Misbah had taken the new ball as soon as it was due, and straightaway handed it to his spinners Babar and Shah. The score was 229-5 at the start of the 81st over, before the spinners struck.
“We have got to talk about what’s just happened. We were hopeful that we learnt some lessons from out trip to India but it doesn’t look that way,” Australia captain Michael Clarke said. “Your goal has to be to try and become better. I say that regularly but our performances here weren’t any better than they were in India.”
Starting at their overnight score of 143-4, Steven Smith and Mitchell Marsh batted confidently in the first 90 minutes of the opening session, taking the score to 208 before Marsh, who top-scored for Australia in the first innings, was the first man to go yesterday.
Marsh (47) departed after putting together a partnership of 107 runs for the sixth wicket when he unnecessarily turned a delivery from Mohammad Hafeez going down the leg side into the hands of Asad Shafiq at leg slip.
The 25-year-old Smith had moved to 97 not out at lunch as Australia reached 238 for the loss of five wickets, but was out of the second ball after the break when he was leg before wicket to Shah three runs short of what would have been a fifth career century.
Apart from one half-chance, when Hafeez at long-off failed to reach a miscued lofted shot off Zulfiqar Babar with Smith on 56, the 25-year-old Australian played with utmost confidence. His 204-ball stand at the crease produced 12 boundaries.
“There’s been some individual positives but as a group we need to assess where we didn’t go particularly well and that’s over all three facets of the game,” Clarke said. “We need to try and look to improve the next time we play in the subcontinent.”
Pakistan next plays New Zealand in a three-test match series which starts Sunday. Australia flies back home where it will take on India in December. AP 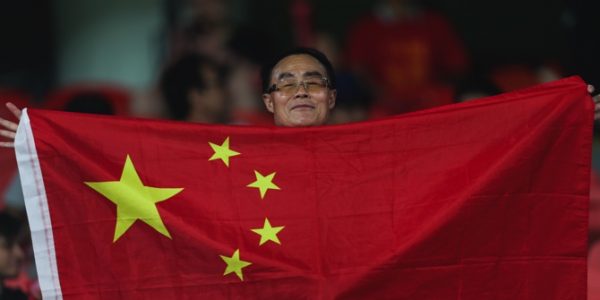