Cricket world quick to respond to death of Hughes 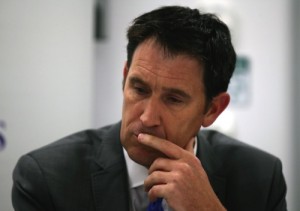 Players and fans across the cricket world expressed shock and sadness at the news of the death of Australian test batsman Phillip Hughes, two days after he was struck on the head by a cricket ball during a domestic first-class match.
As the Pakistan and New Zealand cricket boards called off the second day of their deciding test match in the United Arab Emirates as a mark of respect, the global reaction on social media was immediate and overwhelming.
Sachin Tendulkar was quick to express the grief shared by past and present players, posting on Twitter: “Sad day for cricket. Deepest condolences to family, friends and well-wishers. RIP”
International Cricket Council Chairman Narayanaswami Srinivasan said the world governing body was “shocked and saddened.”
“On behalf of the entire cricket community, I would like to extend my sincere condolences to his family and friends,” Srinivasan said in a statement.
The 25-year-old Hughes never regained consciousness after collapsing on the field when he was struck behind the left ear by a cricket ball during a Sheffield Shield match between South Australia and New South Wales at the Sydney Cricket Ground. Doctors said the impact of the ball damaged an artery leading to a vertebral artery dissection, or massive bleeding on the brain.
Cricket Australia chief executive James Sutherland said Hughes was immensely talented and dearly loved: “Without doubt, he was a rising star whose best cricket was still ahead of him.”
“The word tragedy gets used too often in sport, but this freak accident is real life tragedy,” Sutherland said. “Just days short of his 26th birthday, Phillip has been taken away from us too soon.
“In these darkest hours, cricket puts its collective arms around the Hughes family.”
England cricket great Ian Botham added his condolences, saying the death was a “very sad day for the world of cricket,” but also urged people to “spare a thought for Sean Abbott,” the young New South Wales paceman who bowled the fateful delivery.
Australian spin bowling legend Shane Warne described the loss of Hughes as “an absolute tragedy”.
“He was such an awesome young man, RIP buddy, shattered…” Warne said on Instagram.
Giles Clarke, England and Wales Cricket Board chairman, said Hughes was highly regarded across the cricket world.
“He was an extremely popular and hugely respected cricketer in England and Wales, not only as a successful tourist with various Australian teams, but also as a wonderfully talented county player with Hampshire, Middlesex and Worcestershire,” Giles said. “’He will be missed throughout the world of cricket and today our thoughts are with his family and all those involved in Australian cricket.”
Ex-England allrounder Paul Collingwood echoed the sentiment, tweeting; “Cricket has lost a super talented cricketer but most of all a lovely, lovely man. All our thoughts with his family.”
After deciding to abandon the second day of their third test, Pakistan Cricket Board chairman Shaharyar Khan released a statement saying: “Pakistan’s cricketing fraternity is saddened by Hughes’ passing away, all our thoughts and prayers are with Phil and his family.”
New Zealand Cricket chief executive David White extended his deepest sympathy to Hughes’ family, adding “cricket is a family.”
“Quite apart from its super-competitive edge, it is a game of kinship, mateship and friendship; of camaraderie and community,” White said.
The Pakistan-New Zealand test will resume on Friday — to be considered as the second day’s play — after both cricket boards decided to extend the series by one day. Neil Frankland, Sports Writer, Melbourne, AP