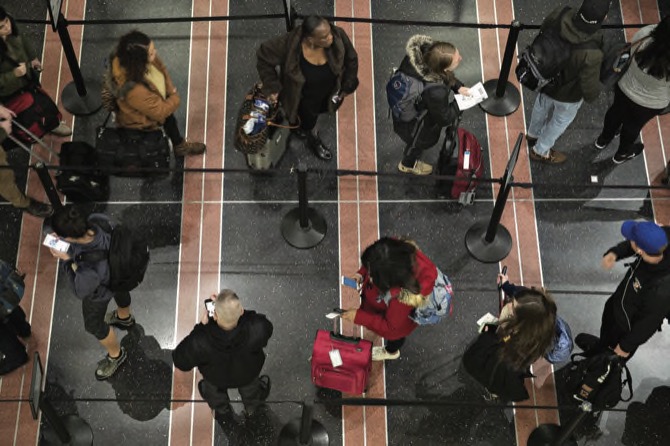 Security breaches at the Macau International Airport allowed at least two people to access the facility’s restricted areas, the Public Security Police Force (PSP) revealed during yesterday’s joint press conference at the Judiciary Police (PJ). The police force also informed that it had detained two people who had entered the region illegally to find work or to gamble.

At the same conference, the PJ notified that it had finally detained a suspect in a large- scale investment scam involving hotel rooms and airfare bookings, and over MOP2.5 million.

In two separate cases reported by the PSP, two tourists, one from mainland China and another from South Korea, were detained by police authorities after entering restricted areas of the Macau International Airport unauthorized.

The first case occurred on Saturday at around 8 p.m., when a woman from mainland China was found by an airport staff member by the baggage claim carousel without permission to be at the location.

The staff member then alerted the police, who questioned the tourist.

The tourist told the PSP she had arrived from Bangkok earlier in the day and after exiting the airport she went for some food in the Cotai area, when she realized that she had forgotten to collect a piece of her luggage.

She then returned to the airport and should have entered through the airport exit in the direction of the carrousel to search for her lost luggage.

According to the PSP report she was not spotted doing so by any of the staff on duty at the gate.
She was presented to the Public Prosecutions Office (MP) under the accusation of illegal entry to a place of forbidden public access.

Coincidentally however, the case was not singular. According to the PSP, another woman around 40 years old from South Korea had been detained the previous day for a similar stunt.

According to the PSP spokesperson, the second case occurred Friday at around 9:30 a.m., when the woman was found in the boarding hall without a boarding card or ticket to board an airplane.

When questioned by the police, she said she had entered the waiting room to ask the staff for information on how she could travel to Japan, unaware that the hall was a restricted area for passengers only.

The staff on duty at the security control check gate told the PSP that they were not sure if she had passed through there or not as there were too many people.

When taken to the police station, the woman refused to cooperate with police, failing to fill out identification forms, not allowing the police to take photos of her and refusing to allow her fingerprints to be collected.

As a result, aside from the crime of illegal entry to a place of forbidden public access, she was also accused of aggravated disobedience. Her case was brought to the MP on Saturday.

A total of six mainland residents with ranging in age from 33 to 55 were scammed by a local 42-year-old woman. The woman tricked them into investing in a scheme involving Macau hotel rooms and Japanese airfare reservations, and the victims reported losses amounting to over MOP2.5 million, the PJ spokesperson said.

The case, which had been followed by the PJ for several months, finally unraveled on Friday when the suspect was detained while trying to exit Macau.

She admitted to scamming the victims, initially two, by offering them the opportunity to invest in the “early bookings scheme” which would allegedly allow investors to claim profits from the sale of bookings made in peak season.

Initially there were two women enrolled in the scheme, and she lured them in by paying them interest. After that, the two first victims invited other people to join the scheme, with the six victims delivering a total of HKD2 million, RMB350,000 and MOP45,000 between November 2018 and February 2019.

According to the PJ, during the questioning that followed her detention, the suspect admitted she had never had any capacity to make “early-bird” reservations from which she could profit, admitting to having used all the money collected to gamble at the local casinos.

The PSP has caught two people who admitted to entering the region illegally.

In the first case, a man from Vietnam was approached by an officer at Avenida 1 de Maio and was requested to provide identification documents.

The man could not fulfill the request and was taken to the police station. Further investigation revealed that the same man had been banned from entering Macau for a period of 10 years from October 2016 until 2026.

He told police he had entered Macau by swimming from the mainland. He also said he had reentered the region seeking a job.

Since entering the region on March 20, he had been sleeping in parks and leisure areas in Macau.

In the second case occurring on Sunday, a man from the mainland was caught on Avenida 24 de Junho after trying to flee the police.

He confessed to illegally entering Macau with the help of a man he found on the internet on March 25, to whom he paid RMB8,000 to enter the city by boat coming from Hengqing.

Further investigation revealed that, like in the first case, a ban had also been imposed on this second man, beginning on February 2019 for a period of four years.

He told police that he wanted to come to Macau to gamble in the casinos and had been doing so since he entered the region on March 26 at around 3 a.m.

Both men have been presented to the MP under the charge of illegal reentrance to the region.