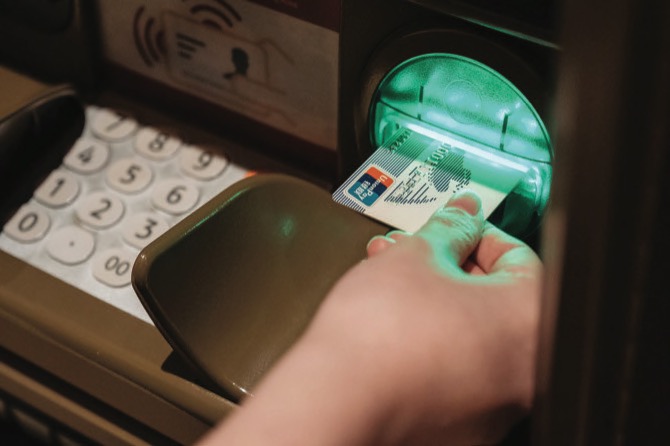 A local septuagenarian was stabbed and robbed at an automatic banking service point on Saturday evening, a Public Security Police Force (PSP) spokesperson revealed yesterday during a joint press conference of the police forces held at the Judiciary Police (PJ) headquarters.

According to the spokesperson, the PSP was alerted to the case by a call from the victim to the 999 emergency line. In the call, the man said he had been stabbed and robbed by another man.

Upon arrival at the site of the attack, at Avenida do Doutor Rodrigo Rodrigues in ZAPE area, officers found the victim with blood on his neck. The man told the police that he had wanted to deposit HKD120,000 in cash using the automatic machine.

While he was inside the banking automatic service point enclosure, counting the money that he had on hand, the suspect entered the same area and positioned himself behind the victim.

He told the police that he had asked the man to give him privacy to use the machine but in response, the man stabbed him in the neck with a pointed object, causing him to fall on the floor and spread the money around the place, before leaving.

After retrieving the cash from the floor, the victim noticed that some HKD3,000 was missing, deducing that the man who had stabbed him in the neck had stolen the missing amount.

The PSP initiated a search of the area and soon found a male that matched the victim’s description of the suspect at the entrance to a car park of a building located in the same area.

In a rubbish bin also located in the area, the officers also found a cap and a fork that were believed to have been used in the attack.

Taken into custody, the suspect, a man in his thirties from mainland China, admitted to the crime and confessed to having used the fork to stab the man.

He added that he did so in response to the bad attitude of the elderly man, who he claims shouted at him and scolded him at the banking service point when he was “just waiting to use the ATM to withdraw some money.”

A body search revealed that the man had HKD2,000 in his possession, which he admitted to having grabbed from the scene on his way out as “revenge.” However, he reaffirmed that he had no intention of performing any unlawful act until the moment that he was “mistreated” by the victim.

The suspect is now being charged with assault with a forbidden weapon, as well as theft, and his case has been put forward for prosecution.

A Vietnamese national has been caught by the PSP as part of a routine operation when she presented a forged non-resident worker permit (commonly known as a ‘blue card’) when asked for identification.

The event occurred on Saturday morning when the woman was asked by an officer on patrol to provide identification. The officer realized that the document was fake and took her into custody.

At the police station, the 28-year-old woman claimed to have acquired the “blue card” from a compatriot back in 2017, adding that she thought the document was real and not a forgery.

The PSP did not disclose any further information on the working status of the Vietnamese woman, although it is believed that she had been working in Macau for the past two years.

Besides the fake blue card, the woman could only provide a Vietnamese passport with its validity expired to the PSP.

She is being charged for possession of the forged document.

A 41-year-old female croupier at a local casino was caught by the security of the casino performing crimes involving the misappropriation of funds with the help of an accomplice, a PJ spokesperson revealed during yesterday’s press conference.

According to the information and proof gathered by the casino, the woman has repeatedly damaged the casino by offering a higher amount in gaming chips to a certain player when he was exchanging cash for chips at her table.

The case arrived at the PJ via a report from the casino which, after reviewing the surveillance cameras, noticed a total of 14 infractions of the same kind committed by the croupier over the last two weeks, always involving the same player, a 27-year-old male from mainland China.

The proof gathered by the casino security shows the woman giving excessive amounts in chips to the man, usually doubling the amount offered in cash by the player.

According to the preliminary review, the casino claims a loss of HKD121,200.

She is now being charged with embezzlement.

Despite the efforts announced by the city’s security chief to manage the problem, the number of scams involving currency exchange and the transfer of money to be spent at local casinos continues to rise.

Over the weekend, another series of cases have been reported to the PJ by victims of scams, with two of them involving a total of four victims, all women from the mainland.

In the first case, a woman found two men at a local casino who claimed to be able to provide the exchange of cash at a VIP room.

Showing a screen-capture on their mobile phone claiming that “their boss” had a total of over HKD4 million in one account to facilitate the exchange, they persuaded the woman to deposit RMB1,798,000 to an account indicated by them.

They then took her to the VIP room and asked her to wait to receive the sum agreed in HKD.

She was unhappy with the waiting time and called the police.

Questioned by the PJ, the two men said that they were paid to perform such a task of luring people into the currency exchange scheme, receiving orders from “the boss” to do so.

According to the PJ, none of them has any relation with the VIP room where they were, and no information was provided regarding the identity of “the boss.”

In the second case, three women who wanted to come to Macau to play in the casinos requested help from a mainland male who claimed to have an account in a Macau gambling room.

They claim to have done so to avoid carrying a large amount of cash when crossing the border.

With the help of the man, they deposited the amount of RMB200,000 in his account and then headed to Macau.

Upon their arrival, the man gave them the money as promised and all seemed well, but after a few hours of gambling in which neither the losses or the earnings were significant, they decided to rest, handing almost the same amount to the same man to keep it for them to continue to play later on that day.

After resting, they searched for the man to retrieve the cash and realized they had lost contact with him. They subsequently presented a complaint about the scam to the PJ.