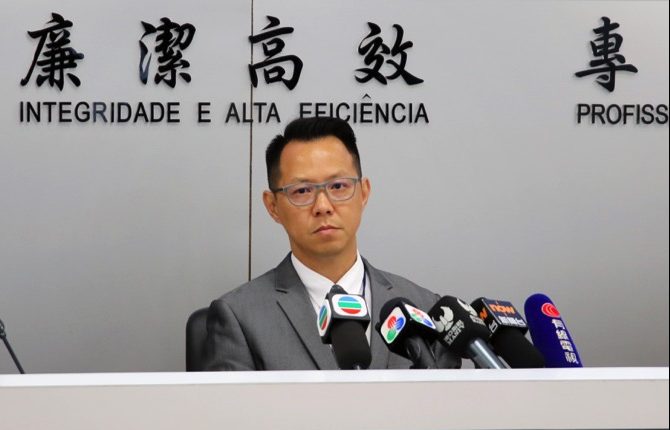 Yesterday, the Public Security Police Force (PSP) announced that on October 19, they detained one person in a case related to the use of forged Macau SAR identification cards and illegal employment. The case was revealed during yesterday’s press conference at PSP facilities.

According to the PSP spokesperson’s report, the force was alerted by a staff member, who had suspected the Macau Identification Cards (BIR) used by at least three construction workers to be forged. The workers were hired by a company to perform renovations at a casino located in the NAPE area .

The man told the police that a contractor and several workers had arrived at the venue to begin work on renovations ordered by the company. Following company procedure to register all the workers in the venue, the staff member noticed that three of the identification documents handed by the workers looked suspicious and called the authorities.

Two of the suspects managed to flee before the arrival of the police, who only detained a third one.

Upon questioning by the police, the man, a 50-year-old mainland resident with a license to travel to Macau and Hong Kong, admitted to handing casino staff a fake Macau ID that he had previously bought on the mainland from an unknown man.

He said he paid RMB300 for the fake Macau ID that would allow him to be employed for the renovation job.

The police also suspected the case might constitute an illegal employment case, in addition to the acquisition and use of a fake identification document.

The case has been forwarded to the Public Prosecutions Office for further proceedings.

The police are still seeking the other two workers who fled and whose whereabouts are unknown.

In a separate PSP report, two men were found driving with high levels of alcohol in their blood over the weekend. The two local residents were caught in different locations after being involved in traffic accidents that indirectly involved third parties.

The first accident occurred at approximately 11 p.m. in Taipa, when the driver crashed against the barriers separating the sidewalk from the road at Estrada do Governador Nobre de Carvalho.

The breathalyzer test revealed a blood-alcohol content (BAC) of 1.82 g/L. As for the second driver, the man was stopped by an officer on duty around the Traffic Police Headquarters in Macau after he crashed his motorcycle into a vehicle parked on the street. The breathalyzer test showed a BAC of 1.95g/L.