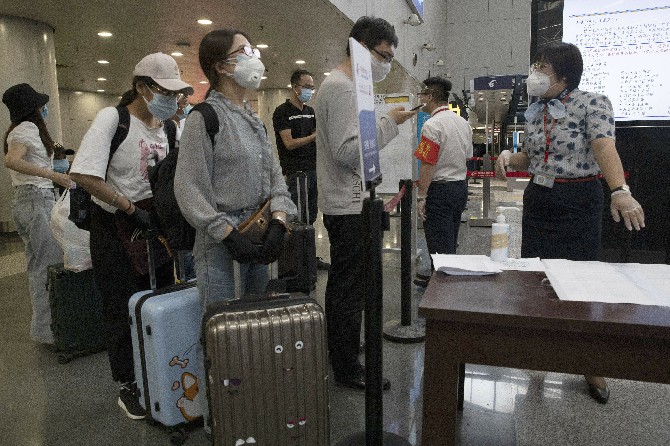 The Public Security Police Force (PSP) has detained two mainlanders who have been overstaying in Macau for a considerable period of time, during which they illegally worked in town.
One of them forged a Macau permanent ID while the other entered Macau with his Taiwan travel permit issued by mainland China.
During yesterday’s joint police press conference, PSP reported the details of the case. On June 15, during the PSP’s road inspection at Avenida Dr. Rodrigo Rodrigues, police officers intercepted one light duty vehicle with three people inside. They were Wang (52), Zhu, and Cheung.
Upon request by the police officers, Wang presented a Macau permanent resident ID card. However, PSP confirmed the inauthenticity of the ID document after a vetting process. In reality, Wang had entered Macau with his mainland passport, which had expired on August 12, 2019. Confronted with the revelation of his overstaying status and his fake ID, Wang jumped off the car and tried to flee the scene but was captured by the police officers.
According to Wang, he had been living in public parks since his visa ended. On one occasion, in a park, he met with a third party who offered him a fake ID for around 1,000 patacas.
The second suspect is Zhu, a mainland resident who was holding a mainland issued and expired Taiwan travel permit.
Zhu has overstayed in Macau for over two years. His travel document expired in May 2018.
Zhu became acquainted with Wang after his document had expired. Wang was also introduced, by another person, to the third suspect Ha. Ha (local resident) hired Wang to work for him in the second half of 2019. Wang then introduced Zhu to the work.
Ha hired the two illegal workers as porters and was paying each person 100 patacas per service.
PSP charged Wang for forging an ID and illegal employment; Ha is accused of illegal employment; Zhu is charged with overstaying and illegal employment.

MOP497,000 healthcare
coupon fraud
A Chinese medicine store is suspected of fraud involving healthcare coupons worth 497,000 patacas in total.
Eight people, consisting of the store’s owner and employees, were arrested. Another six local residents have also been forwarded to the prosecution authority for their engagement in the fraud.
The owner is a 32-year-old local man. He owns a clinic located inside a mall in the northern area of the city and is also a part-time school doctor. His medical business made a total of 622 transactions of healthcare coupons.
A police investigation revealed that the owners of some of these coupons never visited the clinic but had records of purchasing medicine from a nearby Chinese medicine pharmacy with 30% discount. These “patients” would hand in their ID to the Chinese medicine pharmacy and the employees would then claim money from the clinic using the healthcare coupons.
According to PJ, all eight employees of the Chinese medicine pharmacy refused to cooperate with the police authority.
Between September 2018 and April 2020, the aforementioned doctor applied, from the government, for healthcare coupons totaling to 4.49 million patacas, and involving 4,383 local residents.
The PJ has charged the eight people with fraud and for infringement involving computer data, in addition to other accusations.

Store worker takes
illicit possession of
forgotten Macau Passes
A Macau local resident in his 20’s has illicitly taken possession of a total of 14 Macau Passes that were forgotten by customers.
His possession of other people’s property was not discovered until one of the forgotten card owners brought the case to the police authority.
PSP found a total of 14 Macau Passes in the man’s apartment upon investigation.
The PSP charged him for not reporting lost items in his possession to the authority.
Authorities have also recorded another case of drunk driving involving a local resident surnamed Ao Ieong.
Around 2:30 a.m, the suspect was intercepted when he was driving a heavy-duty motorcycle on Avenida Norte do Hipódromo.
He exceeded the legal limit when tested, with 1.27 grams of alcohol per liter of blood.
“Sometimes cars are driving in an unusual way, then we will intercept those drivers,” said PSP.