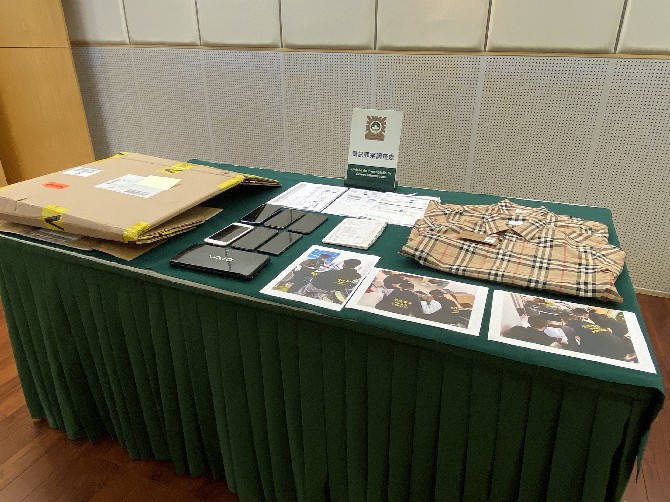 The Judiciary Police (PJ) has uncovered two cases of fraud in which unlawfully used data from credit cards was used for the acquisition of goods in online stores and online gaming. The police believe that such schemes involved the loss of a sum of over 6 million patacas, they informed yesterday during a special press conference.
The PJ also announced the detention of a total of 16 people, all residents of Macau and Hong Kong, in connection to the case. Seven of these people were detained by the PJ in Macau and the other nine in the neighboring region, in a joint operation between the PJ and their Hong Kong counterparts.
In the joint operation, which took place from April 21 to May 3, local police detained six residents of Macau aged between 22 and 32 years old. Five of them confessed to the PJ to having been recruited via the Internet by unknown people to take part in the scheme. According to these suspects, an alleged ringleader would provide them data from credit cards which they would use to load funds into several online gaming accounts.
They also told the PJ that for each transaction, they would receive compensation in the amount of RMB30.
The PJ has managed to establish a direct connection between these people and the use of at least five credit cards from different local banking institutions involving the amount of 53,000 patacas.
The suspects’ mobile phones, as well as computer devices, are being further examined to determine their potential involvement in other cases.
Concurrently, the Hong Kong police authorities have also detained, in the same operation, three men and six women with ages ranging from 15 to 60 years old for their involvement in similar transactions amounting to HKD94,800.
This joint operation was performed by a special group dedicated to investigating the matter, which was created in October last year between Macau and Hong Kong, taking into account the rise in cases of unlawful use of credit card data between the two regions.
In a slightly different case, the PJ said it had detained another local man, also involved in the same type of scheme, but that the force has not yet been able to determine whether he is part of one of the groups or, instead, a third one.
This 35-year-old resident of Macau, who is said by the PJ to be unemployed, is believed to be related to a series of cases that occurred between February and March this year involving data from 25 different local credit cards and a sum of 158,360 patacas.
After an investigation, the PJ found that the suspect was using stolen data from the credit cards to buy several products online in overseas stores. The goods were mostly clothing items from luxury brands and were acquired in European countries and shipped to Macau via postal services.
According to the PJ’s investigation, the local man has received around 400 parcels of these goods, totaling around 6 million patacas, between December last year and March this year.
In the course of the investigation, the police also found that the same man had rented an apartment in Area Preta district to be used as reception point for the parcels as well as shipping some of them to family and friends’ home addresses.
When questioned on May 3, the man revealed that after receiving the items in Macau, they would be reshipped to the mainland to be resold there.
He also told the PJ that he had rented the apartment on the request of an alleged man from the mainland that he was helping.
According to the suspect’s testimony, he performed this activity from June 2020 until March 2021, receiving compensation of HKD30 for each small parcel and HKD80 for each large parcel received.
He denied being involved in the acquisition of the goods and said he did not know where the goods originated from, but according to the information collected by the PJ, the force believes he was lying in making such statements, as the force believes he is one of the main members of the group directly responsible for the operations, including the acquisition of the goods in Europe and their processing into the mainland.
The PJ also said it had evidence that he “acquired the data from the credit cards by illegal means,” not disclosing at this point how or where he got the data from.
Police estimate that he had illicitly profited in the amount of at least 450,000 patacas in the last few months by his involvement in such an unlawful scheme.
In response to media questions, the PJ spokesperson added that the police are continuing to investigate the case to find the source of the credit card data as well as the final destination of the goods in the mainland.
While the other six residents of Macau are being charged only with computer fraud, the last suspect will also be charged with the crime of handling stolen goods.