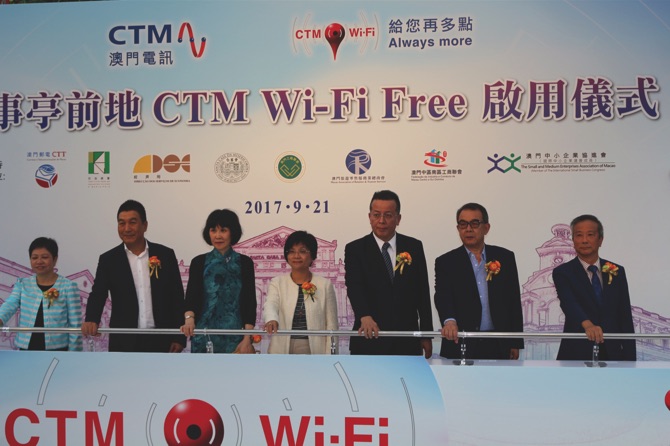 Telecommunications firm CTM has announced the rollout of a number of free Wi-Fi hotspots in shops and tourist attractions in the Senado Square area. At a public press conference held yesterday in the historical square, the company said that the new and convenient service will help to drive the development of e-commerce and boost the image of ‘Digital Macau.’

The rollout of free wifi spots is being coordinated with the assistance of the Holy House of Mercy, located in the square, as well as government entities such as the Macau Economic Services and the Macau Government Tourism Office.

The network, which is titled “CTM-WIFI-FREE”, grants the user 30 minutes of free internet at each of the hotspot locations.

Unlike free Wi-Fi services in many other countries and territories, access to the Senado Square network does not require the input of any personal information, such as a name, telephone number or email address.

Speaking on the sidelines of the event, Ebel Cham, vice president of commerce at CTM, said that the telecommunications firm may look to capture certain information at a later date. However, “right now, we only want to provide a comprehensive service to tourists and the public.”

Data acquisition from tourists is one way that companies are looking to better understand the consumer habits of tourists.

Cham said that the company is planning to advertise the new Senado Square-based services through social media and on transportation vehicles like buses and ferries. There will also be stickers in the area, “at suitable locations,” but not necessarily in the shops themselves.

Across the MSAR, there were currently around 2,500 CTM free Wi-Fi hotspots located at tourist attractions, restaurants, hotels, and on transportation vehicles.

CTM recorded some 2 million log-ins to the free Wi-Fi service in August alone, of which there are 300,000 unique users, according to the vice president. These figures were around 20 percent higher than the normal volume, which Cham attributed to the August 23 Typhoon Hato.

“There were fewer tourists [in the last week of August] because of the typhoon,” she said, but at the same time more locals used the service after their usual data access went offline.

“After the typhoon damaged some of CTM’s network services, some customers lost their data access, and we decided to [activate] the free Wi-Fi hotspots for local residents,” explained Cham. “So, while there were fewer tourists, there were many more locals, leading to a 20 percent increase.”