This Day in History: 1950 – UN stages daring assault on Inchon 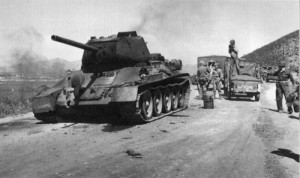 The United Nations has landed up to 50,000 troops behind enemy lines at Inchon, on the west coast of Korea.
Inchon operates as a port for the South Korean capital, Seoul, and the offensive – the first major counter-strike of the war by the US-led allied forces and the South Koreans – is currently reported to be making good progress towards the city.
Seoul has been occupied by Communist North Korea since shortly after its troops invaded the south of the country without warning on 25 June this year.
The republican government fled its own capital in the face of the aggression, which was immediately condemned by the United Nations.
The United States, which believes the USSR to be behind the North Korean action, has since backed the South Koreans with troops and other military assistance.
Operation Chromite – as the current offensive is known – began at 0600 local time. A massive fleet of 262 ships, including British, Canadian and Australian vessels, sailed to the coast off Inchon and landed an advance force of US Marines on Wolmi Island, connected to Inchon by a half-mile-long causeway.
They took the island within 30 minutes and carried on across the causeway to the Korean mainland.
The second wave of infantry was delayed by high tides, but landed at 1700 local time. Led by tanks, they pushed two miles inland under covering fire from aircraft which attacked North Korean shore batteries with rockets and bombs.
The allied landing forces were the largest assembled anywhere since World War II. They were watched by their commander, General Douglas MacArthur, from the flagship of the supporting fleet. After the initial landings, he signalled to the assault force, “The Navy and Marines have never shone more brightly than this morning.”
In a later report to the Defence Department in Washington, he said casualties were light and the whole operation at Inchon was proceeding on schedule. He also paid tribute to “the clockwork coordination and cooperation between the services involved.”
The South Korean Commander-in-Chief, Major-General Chung Il Kwon, said the invading forces were putting pressure on the Communists near Kimpo airfield, a big air base to the north of Inchon. There has been little resistance from the North Korean People’s Army (NKPA), who are believed to have been taken completely by surprise by the attack.

The Inchon landings were among the greatest amphibious assaults in military history, and proved a turning point in the Korean War.
North Korean forces found their recent advances reversed in the face of the allied offensive, and by the end of the month the United Nations had re-taken Seoul.
General MacArthur pursued the NKPA back behind the 38th Parallel, the border dividing the country into two halves after the end of World War II.
UN forces captured the North Korean capital, Pyongyang, on 19 October, but when the Chinese joined the war on 26 November the tide turned dramatically against the allies.
The US Marines were driven back south of the 38th Parallel again, and Seoul was to change hands twice more before the war degenerated into stalemate.
After 18 months of painstaking negotiation, the two sides agreed an armistice on 27 July 1953.
It restored the 38th Parallel as a border and established a 4km wide demilitarization zone.
To this day, the two sides have not signed a peace treaty and remain technically at war.