this day in history: 1980 Reagan beats Carter in landslide 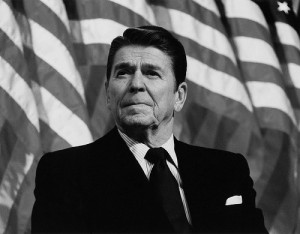 The former Hollywood actor and Republican governor of California Ronald Reagan is to be the next president of the United States.
He has defeated Democrat Jimmy Carter in the US presidential elections by a huge majority.
At the age of 69, Mr Reagan will be America’s oldest president. His running mate, former head of the CIA George Bush, will be his vice-president.
The Republicans took state after state in the east, south and mid-west, with results from their stronghold in the west still to come. So far Mr Reagan’s electoral vote tally stands at 238 while Mr Carter’s is just 35.
In the last speech of his campaign last night, Mr Reagan with his wife Nancy, addressed 30,000 supporters at a car park of a shopping centre in San Diego, California.
He spoke of the state of the American economy under President Carter as “a major tragedy for the American family”.
“In eight years here as your governor,” he said, “I learned to have faith in you, the people and I envision a leadership as President taking government off your backs and turning you loose to do what I know you can do best.”
His speech was followed by a dazzling firework display after which he returned to his home in Pacific Palisades, Los Angeles to spend polling day resting.
The outgoing president’s popularity has suffered following the energy crisis and petrol queues. It seems his failure to negotiate a release of US hostages currently held in Iran has sealed his fate.
Surveys of public opinion also suggest Mr Reagan’s performance in last Tuesday’s televised debate convinced many he was the most suitable candidate.
President Carter is the first elected sitting president to be defeated since Herbert Hoover was beaten by Franklin D Roosevelt in 1932.
Even before the polls closed on the West coast, he drove from the White House to a Washington hotel to address his supporters an hour after congratulating Mr Reagan by phone.
He told them: “I can stand here and say it doesn’t hurt.”
Putting on a brave smile he added: “The people of the United States have made their choice and I accept that decision.”
Mr Carter remains president until Mr Reagan is inaugurated next January.

Final results showed Ronald Reagan won 489 electoral votes against the Democrats’ 49.
Mr Reagan was inaugurated as president on 20 January 1981.
Later that year he survived an assassination attempt.
President Reagan cut taxes, increased defence spending and in 1983 approved the US invasion of Grenada and CIA operations in Nicaragua, in spite of Congressional opposition.
He was re-elected by a landslide in 1984 and began arms-control talks with the USSR that led to the Intermediate Nuclear Forces (INF) Treaty in 1987.
He remained extremely popular right till the end of his term in 1989 despite the scandal over US arms sales to Iran that provoked worldwide criticism.
In 1994 he announced he was suffering from Alzheimer’s disease. He died ten years later aged 93.
After his defeat, Mr Carter was active as a peacemaker in Ethiopia, Sudan, Liberia and Haiti where, in 1994, he persuaded the military junta in Haiti to renounce power and allow a peaceful US occupation.