This Day in History | 2002 – Dozens killed in Bali nightclub explosion 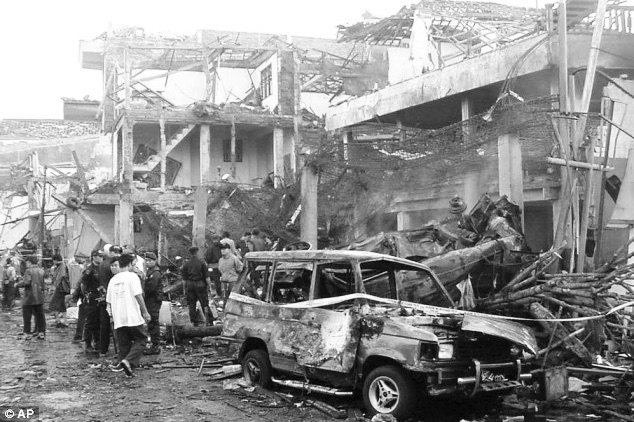 Reports from the Indonesian holiday island of Bali say more than 50 people have been killed in two explosions.
At least 10 foreigners died and more than 120 people were injured – including tourists from Australia, the US, Britain and Europe.
One of the bombs exploded at a nightclub in Kuta Beach, the island’s main tourist resort.
Another smaller explosion occurred in nearby Denpasar, Bali’s capital, close to the United States Honorary Consulate. Local police say bomb squad officers are investigating, although the cause of the explosions has not been confirmed.
The explosion in Kuta occurred at about 2330 local time when the bars would have been packed with tourists. Witnesses say the blast destroyed the Sari Club and the resulting fire then engulfed a neighboring bar, Paddy’s Irish Club.
Other buildings and several cars were also damaged in the blast and ensuing fire. One witness, Richard Poore, a cameraman for a New Zealand TV company, said the force of the explosion was so strong it severely damaged his hotel nearly 1km away.
“The windows of the hotel blew out, the upper floors have lost their ceilings and dropped in and there was an incredible amount of smoke in the sky.”
Mr Poore explained that his “first instinct was to run up the road with a camera” to film the scenes of devastation. “I have just never seen anything like it. It was horrendous. Total carnage,” he said.
The US embassy in Jakarta has issued a series of warnings in recent weeks that its nationals could be targeted by Islamic militants linked to the al-Qaeda terror group.
The embassy itself closed for several days last month after intelligence reports indicated militant groups were planning car bomb attacks.
Indonesian officials have in the past denied that militants linked to al-Qaeda are active in the country.
Known as the Island of the Gods, Bali is a popular holiday resort – 1.5 million tourists visited in 2001.

A huge car bomb killed 202 people, mainly Australians. No injuries occurred in the American consulate explosion. The dead and injured came from as many as 24 different countries.
The regional Islamic group Jemaah Islamiah (JI), was named as a key suspect in the 2003 Bali bomb. JI has alleged links to al-Qaeda.
Three men were sentenced to death for the bombings – Amrozi bin Nurhasyim, his brother Mukhlas and Imam Samudra. Ali Imron was sentenced to life imprisonment.
More than a dozen others were given lengthy jail sentences for their part in the plot.
On 1 October 2005 Bali was targeted again when three suicide bombers blew themselves up in tourist areas killing at least 19 people, mostly Indonesians. Jemaah Islamiah is once more suspected of carrying out this attack.