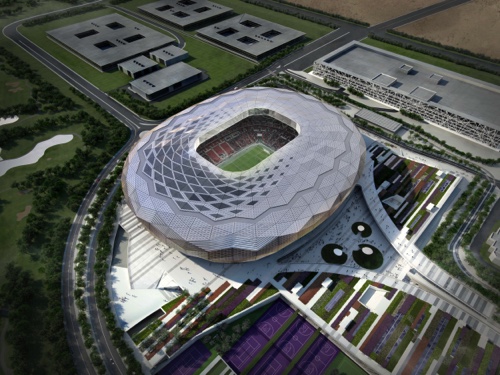 Leaders of Qatar seem to have a simple formula for their plans over the next decade: money + sports = global fame.
Never in sporting history has a country invested so massively, quickly, broadly, internationally and ostentatiously as the small oil-and-gas rich Gulf emirate that is using the world’s thirst for energy and for sporting entertainment to realize its giant “look at me!” ambitions.
With a spending spree of staggering reach and proportions, the thumb of desert with a native population of just 282,750 — that would be 14th in a list of London boroughs and tied with Toledo, Ohio, for 66th among U.S. cities — has used sports to make itself a household name in Europe. The rest of the world is next.
Lionel Messi and his teammates wear “QATAR AIRWAYS” on the front of their Barcelona shirts for USD40 million a year, which Qatar was earning in just three hours from hydrocarbon exports before the recent plunge in oil prices.
Hundreds of millions more bought Paris Saint-Germain, France’s most glamorous football team, and made it champion again.
Further vast spending has greased Qatar’s passage in sport’s corridors of power, made it the new favored venue for major events, acquired another team in Belgium, enabled Qatar’s sports broadcaster to muscle aside international competitors, sponsored Europe’s richest horse race, and built a world-class sports hospital and a state-of-the art training academy in Doha that makes hardened sports pros giddy with awe.
And that’s just the start. The projected cost of readying Qatar to host football’s World Cup in 2022: an otherworldly $160 billion dollars.
Small wonder that when Qatar’s sports minister walks into a room, some see a walking cash machine.
Speaking to The Associated Press in a rare and exclusive interview, Salah bin Ghanem bin Nasser al-Ali recalled that as a student in the United States, people used to ask him: “Where is Qatar?”
Now they ask: How about investing in our sport, our team?
“Most of the meetings with officials are like this,” he said. “We in Qatar, we look for good opportunities. I meet a lot of them and they do presentations from buying clubs, to new clubs, to all kinds of sports, and introducing new sports in Qatar. And a lot of opportunities. We are open. We listen.”
Qatar’s grab on sport isn’t only for prestige, recognition, vanity and to drill new wells of revenue for when oil and gas run dry. It also sees sport as a way of motivating Qataris who, thanks to the riches underground, are the world’s second-wealthiest people per capita but, in obesity and diabetes, have the health problems of comfortable living.
“You want to create a challenge for them,” al-Ali said. “Some countries they create, really, political challenges — you know? — to make a focus for the people (or they) create another enemy.”
At the turn of the 20th century, this former British protectorate smaller than Puerto Rico first tasted prosperity when it became the hub of the pearl industry. Then Japan farmed pearls, took over the global market and the bottom fell out for Qatar.
Today, that collapse is still cited as an example of why Qatar must think long-term, prepare for a post-hydrocarbon future and build an economy based instead on a well-educated population and revenues from its growing portfolio of global investments — Barclays Bank, London’s iconic Harrods department store, its stock exchange, and 2012 Olympic Village, to name just some.
“You always think, ‘OK, what can I do to survive in difficult circumstances?’ I think one of them is to have a good relationship with big countries,” al-Ali said. “You need to be known, you need to be heard.”
So sports fans find themselves tuning into beIN Sports — an offshoot of Qatar’s Al Jazeera network — that is gobbling up broadcasting rights not only in the Middle East but also the Americas, Australasia and France. That operation is one the most visible vehicles of Qatar, whose acquisition-hungry sovereign wealth funds are estimated to be worth more than $100 billion.
At Paris Saint-Germain, fans now celebrate again after Qatar’s 2011 takeover and star recruits — David Beckham finished his career there — ended the club’s 19-year title drought in Ligue 1.
When the Middle East’s first World Cup kicks off in 2022, Qatar will already have hosted world championships in track, swimming, handball, volleyball and possibly also basketball, since it is bidding to stage that sport’s World Cup in 2019 or 2023. In the process, Qatar will also have trained sports-management administrators and workers who could challenge Western firms in the big business of organizing and marketing sports.
“Any event that we deliver now in the Middle East is entirely delivered by organizations or by firms coming from either the West or North America and South America,” said Mushtaq al-Waeli, executive director of a Qatari institute, Josoor, that is training people from the Middle East and North Africa ahead of the World Cup.
“They take the experience and they go back and do it somewhere else,” he said in an AP interview. “So there is no legacy really left in our region.”
Still, Qatar hungers for more.
Failed bids for the 2016 and 2020 Olympics could serve as dry-runs for another try. And there are plenty more sports, teams and events for Qatar to buy into. The sports minister said he personally would like to own an English Premier League club one day.
“We have a special team for the investment,” he said. “They are good business people. They are learning. They are getting better and better… They are investigating all opportunities, I think in America, in England and everywhere.”
“I don’t think we are going to stop.” John Leicester & Rob Harris, Sports Writers, DohaAP