DocLisboa returns to town this month 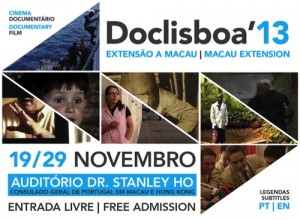 The Macau leg of Portuguese film festival DocLisboa 2014 returns to town this month, with a set of nine films set to be screened between November 19 and 29. This is the second consecutive year that DocLisboa’s program has extended to Macau, in collaboration with the Portuguese Institute of the Orient (IPOR).
All produced during 2013, seven feature films and two short-films directed by Portuguese filmmakers and included in several of the festival’s competing categories will be shown in Macau. In this year’s edition, André Valentim Almeida, who directed “A Campanha do Creoula” and was awarded the Doc Alliance prize will be in Macau to discuss his film with the audience, as well as to participate in sharing sessions in local schools and universities.
André Valentim Almeida is a researcher and assistant professor at the University of Porto, where he’s currently undertaking his PhD focusing on documentary films. He has directed several films over the past few years, such as “From New York with Love” (2012), “Uma na Bravo Outra na Ditadura” (2010) and “New York is a Big Apple” (2010).
The DocLisboa films will be screened daily at the Portuguese Consulate auditorium until November 29. These include Vida Activa (“Active Life,” by Susana Nobre), Os Dias com Ele (Maria Clara Escobar), Cara a Cara (“Face to Face,” by Margarida Leitão), 3 Horas para Amar (“Three hours to love,” by Patrícia Nogueira), Pavia de Ahos by Catarina Laranjeiro, and In Medias Res, by Luciana Fina. “Tabatô,” a film directed by João Viana, which was also granted an award, will be shown, too.
DocLisboa’s program extension to Macau is organized by IPOR, in cooperation with APORDOC (organizer of DocLisboa), and the Cultural Affairs Bureau, with the support of the Portuguese Consulate General to Macau and Hong Kong.  MDT/Lusa

Two films by Macau directors were screened during the 23rd Golden Rooster and Hundred Flowers Film Festival held late September in Lanzhou, the capital of Gansu province. “The Memories,” a film by local director Ho Fei, was chosen as the opening film of the “Hong Kong and Macao Film Showcase” session. “Timing” by Emily Chan was also screened. The Cultural Affairs Bureau (IC) said in a statement that both films were well received.  Filmmaker Ho Fei stated that he felt encouraged by seeing his film screened as the opening movie of the Hong Kong and Macau session. Emily Chan stressed that although her film has a local story, it’s still appealing to mainland Chinese audiences. During the “Hong Kong and Macao Film Showcase” opening ceremony, Li Xuejian, chairman of the China Film Association, said that there has been a recent emergence of promising young Macau directors that can enrich Chinese film selections. Acting Chief of the Department for the Promotion of Cultural and Creative Industries, Leong Ieng Va, encouraged local filmmakers to explore various genres. The Golden Rooster and Hundred Flowers Film Festival is one of China’s four major film festivals.