Drive In | An out-of-this-world experiment in ‘Spaceship Earth’ 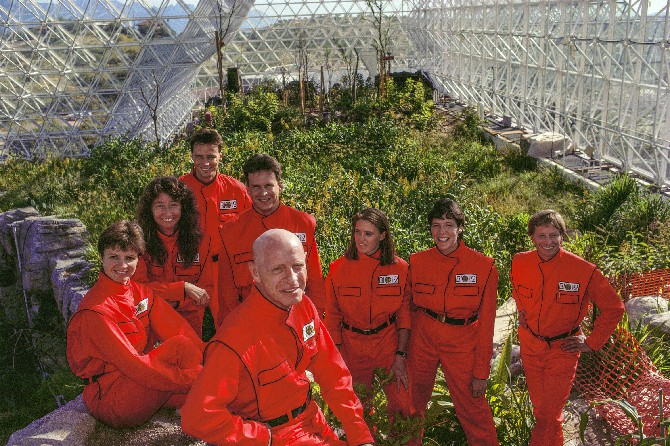 Dr. Roy Walford (foreground) with candidates for the Biosphere 2 Project from the documentary “Spaceship Earth”

During lockdown, have you taken a moment to appreciate that at least you’re not quarantined with eight free-thinking adventurers in a terrarium of depleting oxygen levels?
Matt Wolf’s documentary “Spaceship Earth” provides some illuminating context to our shut-in days by going back to the early 1990s to study the Biosphere II, that quixotic endeavor in the Arizona desert in which eight men and women sealed themselves off in a 3-acre complex. The whole affair, of dubious scientific benefit but high public interest, had the look and feel of science fiction, right down to the “Star Trek”-like jumpsuits and the Buckminster Fuller-inspired architecture.
The goal of Biosphere II (Earth they considered the first Biosphere) was to create a self-sustaining colony that could be replicated on other planets and prepare this one for global-warming disaster. It was a lifeboat and laboratory in one; a fanciful ark for a fallen world.
In previous films, Wolf has shown a penchant for brilliant, bizarre Americans in pursuit of transcendence. In 2008’s “Wild Combination,” he profiled the avant-garde musician Arthur Russell. In his previous film, “Recorder: The Marion Stokes Project,” he mined the archives and story of a woman who slavishly recorded TV news on VCRs for decades. He makes sober movies about eccentrics who are — often admirably so — out there.
“Spaceship Earth” brings a boat load of new specimens. Foremost among them is John Allen, the leader of the group that would, before embarking on the biosphere, co-found the experimental theater troupe Theater of All Possibilities. The group, forged in ‘60s San Francisco, would move on to more elaborate performative works. They started a ranch. They build a ship, named it the Heraclitus, and sailed it around the world. In Kathmandu, they built a hotel.
How did they afford this all? They had a billionaire backer in Ed Bass, scion of a Texas oil family. The group’s members maintain they were seeking transformation, only not through drugs or ephemera. “We weren’t a commune,” says one. “We were a corporation.”
The Biosphere II was their biggest gamble yet. It was covered by some networks as a historic event, while others derided it as “ecological entertainment” or — as ABC’s Peter Jennings says in the film “a tourist attraction run by questionable characters.” It was, undoubtedly, as much performance art as science. And while it drew support from the Smithsonian and universities, its closed system was eventually discovered to be a fraud. Carbon dioxide scrubbers were secretly used to clear the air inside.
The lack of oxygen didn’t help anyone’s mood, nor did a steady diet of beats. Infighting increased. The experiment began to more resemble a reality-TV game show. (There was even mud wrestling.) After the two-year experiment was over — and just when you think the weirdness is subsiding — Bass removed the top executives and brought in Steve Bannon to run things.
“Spaceship Earth,” with a glowing score by Owen Pallett, doesn’t cast judgment on most of its subjects. It’s content to go along for the ride, marveling at all the surrealism. You’d say the story was out of this world if it wasn’t so much of it.