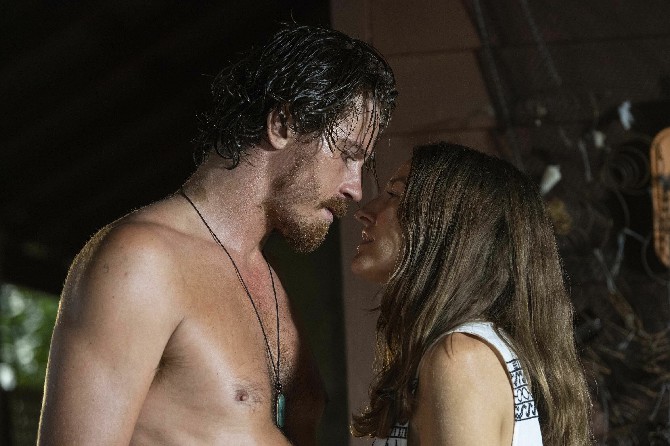 Everyone is sad in the Australian indie “ Dirt Music,” a sprawling story about a small fishing town, an affair and the dark secrets that tie everyone together. But at least the Western Australia setting is pretty, and the people are, too.
The film stars Kelly Macdonald as Georgie, a former nurse who has taken up with a widower crayfish baron, Jim Buckridge (David Wenham) in White Point. But life in their modern seaside mansion with epic views and two well-behaved little boys doesn’t seem to be enough. Georgie doesn’t fit in among the townies, even with her partner being the local bigwig. She wakes before sunrise to skinny dip in the water and day drinks white wine until she falls asleep on the couch.
But on one early morning swim she spots a sad, handsome, bearded man, Lu Fox (Garrett Hedlund), out in the water poaching some of the crayfish. They have a very brief chat, him being in the middle of an illegal activity and her being naked in the water, but all it takes is one more run-in on the side of the road before they’re engulfed in a full-fledged affair. It happens so quickly, you might think you’ve missed something. Surely they know each other, you think. (They don’t. It really does happen that quickly.)
Weirdly, neither of the leads are Australian and it’s hard not to wonder why they cast a Scotswoman and a Minnesotan when there are all those homegrown Hemsworths running around. But Hedlund and Macdonald have enough natural chemistry to sort of pull it off despite the gratingly simplistic dialogue that strives for lyricism but often just ends up sounding silly.
Lu is a broken man, so broken that he can’t even be bothered to give his dog a name, play music or even listen to it anymore. His past is a mystery, but something tragic happened involving a little girl, his niece, that he won’t quite let himself remember fully. And Georgie can’t resist him.
Unbeknownst to Georgie, Lu Fox and Jim Buckridge have a history, so when the affair is found out, things go south very quickly and what started as a sexy, sad Nicholas Sparks-adjacent romance veers into outback thriller territory before settling into a spiritual walkabout.
“Dirt Music” is based on a popular 2001 novel by Tim Winton that people have been trying to adapt for years. At one point, Phillip Noyce was going to direct, but gave up when the script never quite succeeded in capturing the “poetry of the novel.” It eventually landed in “Ned Kelly” director Gregor Jordan’s hands, working off a script by Jack Thorne (“The Aeronauts”).
The film falls into the trap of so many literary adaptations: It tries to do too much. You can see how rich Winton’s novel probably is and yearn for more information on Georgie, her family (who have a very brief, fraught and confusing introduction), Jim and the town. But condensed into a feature film, all those side characters and atmosphere and details either get unsatisfactory nods or are brushed over completely and it makes for a confusing and jarring viewing experience.
Instead, Jordan opts for a kind of minimalist, modern Western approach with two lost characters who have to go to the edge of the earth to find themselves.
And while we can live without a deep understanding of the White Point economy and Jim’s standing in it (sometimes he’s drawn like a mob boss, sometimes like the most beloved man in town), it is particularly odd that the story’s protagonist, Georgie, never feels like a fully drawn character. Why is she so lost? Why is she with Jim in the first place? Why does the monosyllabic Lu inspire her to blow up her life?
Answers are few in “Dirt Music” and the big reveals aren’t exactly the most satisfying, but at least the landscapes are.