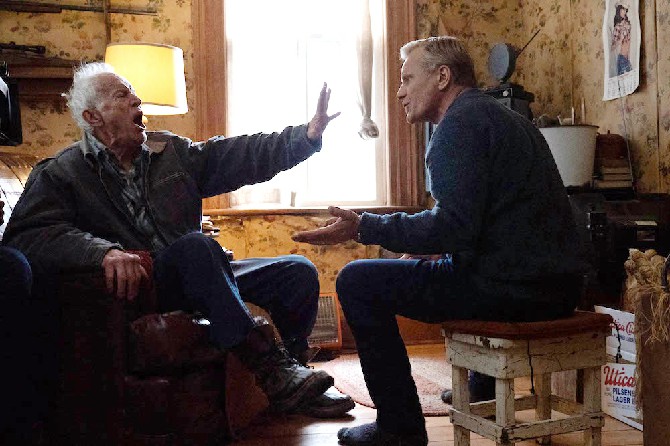 Viggo Mortensen may have three Oscar nominations to his name, but I get the feeling most folks still don’t take the guy seriously enough. Maybe they don’t realize that, in addition to his acting work, Mortensen is also a painter, a poet, a photographer and a musician. When “The Lord of the Rings” made him rich, he used some of that money to launch an indie publishing label, Perceval Press. And between high-profile projects, he went out of his way to collaborate with international auteurs such as Lisandro Alonso (“Jauja”) and David Oelhoffen (“Far From Men”), comfortably acting in languages other than English (he speaks seven).
So what kind of directorial touch should we expect from such a Renaissance man? Will his first feature turn out to be basic and broad, like the meatball chauffeur he played in “Green Book,” or more poetic, informed by his work with relatively esoteric-minded art-house helmers? The answer, you may not be surprised to learn, is a little of both. More deeply felt than your typical American debut, “Falling” is unpretentious and perfectly accessible to mainstream audiences. Mortensen’s patience, his way with actors and his trust in our intelligence are not unlike late-career Eastwood, which isn’t a bad place to be so early in one’s directing career.
Drawing on his own upbringing while touching on universal themes of family and loss, Mortensen reimagines the relationship with his parents — doting mother, difficult father — through the protective filter of fiction. In the process, the actor reminds that his best work comes from a place of emotional vulnerability. Dad was clearly a piece of work, portrayed here as a scorpion-tempered patriarch who dominated his family for decades (roughly half the movie takes place in flashback, featuring Sverrir Gudnason as Willis, the tough-love father), growing even more difficult with the onset of dementia (as seen in the present, where Lance Henriksen brings the hellfire).
The film takes place over roughly a week, as Willis leaves his Midwestern farm to seek lodging closer to his son in California — which is like escaping the viper’s nest, only to invite the snake back into one’s home. A consistent challenge whom some may find unbearable, Willis isn’t a villain, at least not in Mortensen’s eyes. His script manages to be tough yet tender while remaining objective enough not to do a “Mommie Dearest”-style hit job on his dad. Selected for the closing-night slot of the 2020 Sundance Film Festival, “Falling” feels like a cross between two other Park City premieres of recent vintage: Shia LaBeouf’s transparently therapeutic “Honey Boy” and Paul Dano’s 1960s-set “Wildlife,” in which a bitter divorce serves as the crucible from which an artistic teenager forges his independence.
The movie packs two big surprises: First, Mortensen plays gay, which isn’t the case in real life. The choice serves to heighten the conflict between his character, John, and his immigrant father. Second, it gives erstwhile action star Henriksen (Bishop in “Aliens”) an unprecedented opportunity to actually act.
Now pushing 80, Henriksen already looked grizzled by the time he hit 40, and that quality — a raw Marlboro Man toughness written on his face and carved into his cheeks — serves the character well, extending to Willis’ stubborn cigarette habit. He’s similarly unfiltered in his remarks, taunting others with off-color quips about “Negros” and “fairies” and “whores” the way a mean-streak teen tosses cherry bombs, determined to provoke a reaction. “I promised myself I was not going to rise to the bait and engage in another big blowout,” John says at one point.
The film doesn’t give in to such grudges either, preferring a more oblique approach to revealing the source of the scars left by such parenting. If you don’t count Willis’ words to his infant son — “I’m sorry I brought you into this world so you could die” — the first sign that he’s not the great father young John (Grady McKenzie) idealized comes when slightly older John (Etienne Kellici) overhears his mom (Hannah Gross) on the couch sobbing while listening to a recording of Chopin’s Waltz in C Sharp Minor. (Mortensen composed and performed the gentle piano score.)
“Falling” isn’t just about father-son dynamics; it’s also reflective of Mortensen’s relationship with his mother, who died relatively young. While it’s a bit simplistic to imply that John, a “momma’s boy,” should grow up to be gay, it’s clear Mortensen appreciates how difficult coming out would be for someone raised by such an authoritarian (pursuing an artistic career may have been similar for him, whereas John went off and joined the Air Force). The way Mortensen signifies John’s homosexuality, by unabashedly kissing his Asian American partner (Terry Chen) in front of his disapproving and racist dad, makes no big deal of that identity but speaks volumes about the many off-screen arguments that have brought them to this detente.
Meanwhile, Henriksen portrays Willis as someone who, bitter in his old age, rejects John’s help at every turn. It won’t take a mental-health professional to recognize that Willis has control issues, which lends an added dimension of tragedy to his dementia. Mortensen elegantly, intuitively weaves past and present throughout the film, inviting just enough ambiguity for us to wonder whose point of view we’re getting: Do these flashbacks belong to John, or are they windows into Willis’ subjectivity — an attempt by the son to better understand his father?
“Falling” ends with a lovely scene that ought not to be spoiled here. Suffice to say, it pays off a question asked by Willis’ adoptive granddaughter (Gabby Velis), revealing another character’s final words and what was going through that person’s head at the time. Mortensen also carves out a small but impactful role for Laura Linney as John’s adult sister, who does her own version of walking on eggshells around the combustible Willis. It took long enough for someone to entrust a part as tricky as this to Henriksen, whose plunge pays off in Mortensen’s sensitive hands. Peter Debruge, Variety

Editor’s Note: This film will be shown in IFFAM 2020’s top competition.