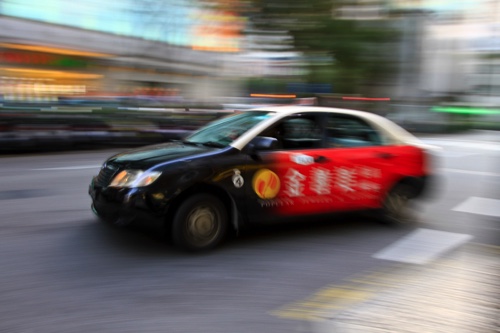 Following the expiration of the Vang Iek Radio Taxi concession contract at midnight, the Transport Bureau (DSAT) deputy director Chiang Ngoc Vai reminded the public that they will now have to call the two black taxi hotlines for the “dial-a-cab” service.
“We called on people to pay attention to several phone numbers. The first are the two dial-a-cab numbers of the two black taxi associations. They are 2893 9939 and 2828 3283. As for those who need barrier-free taxis, they can call 2852 7101 or 6669 3405 if they want to go to the hospitals or public clinics. If they want point-to-point transportation, they can call 2840 3315,” Mr Chiang said on the sidelines of the GP joint-department press conference.
Moreover, the deputy director vowed to step up the study of all public opinions collected in relation to taxi regulation. The authorities will also adjust the conditions of future special concession and provide a good operational environment for the future concessionaire.
When questioned about the government’s failure to provide a long-term solution to the yellow cab issue, despite being aware of the problem for a long time, Chiang Ngoc Vai reiterated that they have kept in close contact with Vang Iek. Officials also know there is a considerable demand for dial-a-cab services in society. As a result, they want to resolve the issue through contract renewal, and by creating better operational conditions for the concessionaire. “We have asked [Vang Iek] to submit their demands multiple times. We only received the demands at the end of September. This means that we have to consult on how the [additional] fee will impact society and the acceptability among residents (…) Since we could not reach a compromise with Vang Iek over the issue, we decided not to renew the contract,” he explained.
The deputy director also indicated that DSAT has already notified the Public Security Police regarding the expiration of the yellow cab concession. DSAT inspectors will monitor the streets of Macau after midnight. He said that while it is legal for the yellow cabs to run after the concession’s expiry, they will be in violation of the law if they take passengers. JPL

COURTS | Man sentenced for subletting flat to other illegal immigrants

A mainland man who was staying illegally in Macau has been sentenced to three years and six months in jail for subletting an apartment to four other illegal immigrants.
The case dates back to March 2007, when his wife rented an apartment in Macau. The man, however, was deported to mainland China in May 2007, and was prohibited from entering Macau again for two years. Regardless of the Macau authorities’ order, he traveled from Zhuhai to Macau by boat later that month, entering the territory illegally.
Once in the city, and living with his wife in a rented flat, they sublet the property to four illegal immigrants. In October 2007, Public Security Police Force agents uncovered the crime.
In 2012, the suspect was sentenced to five years in prison for an illegal re-entry into the territory. He was also sentenced to an effective penalty of three years and nine months in jail over four illegal subletting-
related crimes.
He filed an appeal with the Court of Second Instance (TSI) arguing that he had been tried twice for illegally overstaying, and the overall penalty applied was too heavy. The Court recognized that there was a need to adjust his penalty and took into consideration only one crime of illegal entry into the territory. TSI has now sentenced the individual to three years and six months in jail. CP