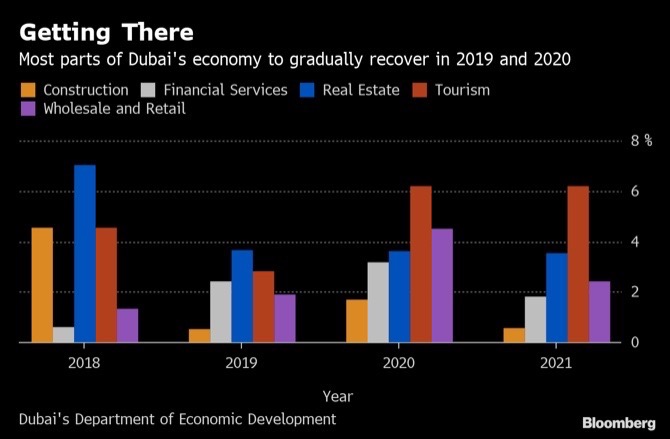 Dubai is looking to retail and tourism to break free of its weakest economic expansion in almost a decade.

Growth in the city’s gross domestic product is set to accelerate to 2.1 percent in 2019 and 3.8 percent the following year before slowing to 2.8 percent in 2021, according to projections released on Sunday by the emirate’s department of economic development. GDP expanded only 1.9 percent in 2018, substantially below forecasts made by the International Monetary Fund.

A turnaround for the economy is riding on a better performance for industries other than Dubai’s bellwether real estate sector, with improvements seen this year and next for finance, tourism as well as retail and wholesale. The emirate’s 2020 World Expo will contribute 22.7 billion dirhams (USD6.2 billion) to the economy during the fair next year and another 62.2 billion dirhams after it’s over, according to auditing firm Ernst & Young LLP.

“Economic momentum has picked up at the beginning of this year with a surge in new business licenses and improved optimism on jobs and business performance,” the department said in its statement.

Growth in financial services is expected to speed up to 2.4 percent in 2019 from last year’s 0.6 percent Real estate, which has struggled with declines in prices, is one of the few sectors not projected to accelerate further after the expo. The industry’s expansion will slow this year to 3.7 percent from 7 percent in 2018.

The emirate’s economic slowdown to 1.9 percent for last year was revealed by Dubai’s statistics center in March, in a long-awaited set of figures after months of no official word on the economy.

“We remain cautious at this point on the recovery in the externally facing sectors, such as trade and tourism-related, given the ongoing headwinds such as a strong currency and slowing global growth,” Monica Malik, chief economist at Abu Dhabi Commercial Bank, said by email. Still, “we do see a gradual pickup in real GDP growth in Dubai in 2019.” Abeer Abu Omar, Bloomberg