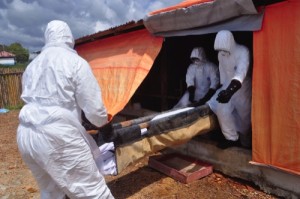 Malian authorities yesterday reported two new deaths from Ebola that are not believed to be linked to the nation’s only other known case, an alarming setback as Mali tries to limit the epidemic ravaging other countries in the region.
The announcement in this city of about 2 million came just a day after Malian health authorities said there had been no other reported cases — let alone deaths — after a 2-year-old girl who had traveled to Mali from Guinea succumbed to the virus in late October.
A nurse working at a clinic in the capital of Bamako died Tuesday, and tests later showed she had Ebola, Communications Minister Mahamadou Camara said yesterday. A patient she had treated died on Monday and was later confirmed to have had the disease as well.
The patient — a Guinean national — came to the Clinique Pasteur on Oct. 25 late at night and was so ill he could not speak or give information about his symptoms, said the head of the clinic.
“His family did not give us all the information that would have led us to suspect Ebola,” Dramane Maiga told The Associated Press.
Government health officials were slow to act, Maiga said. The nurse was hospitalized on Saturday and hospital officials did not call the health ministry until Monday morning. Health officials did not arrive at the clinic until 6 p.m. and by the time the test results came back, the 25-year-old nurse was already dead, said Maiga.
The new Ebola cases come just as public health officials started to think Mali had avoided the worst. The cases are stark reminders that the disease is hard to track and the entire West Africa region remains vulnerable as long as there are cases anywhere.
Nearly 5,000 people have died this year in the region from the virus, which first erupted in Guinea, on Mali’s border. Baba Ahmed, Bamako , AP