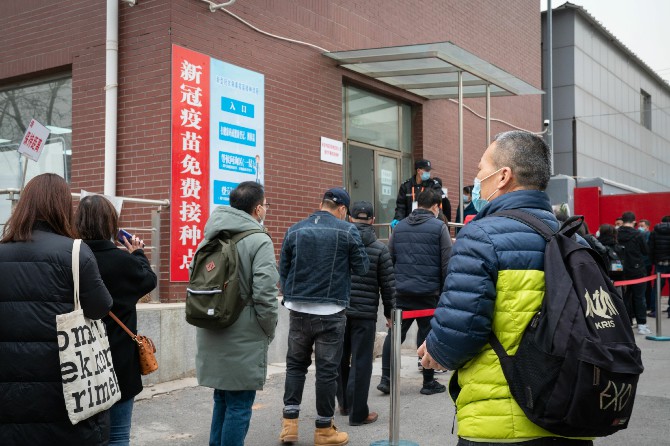 China’s ambitious plan to vaccinate 40% of its population by the end of June could pave the way for lifting the economy’s growth rate to 9.3% this year, Oxford Economics forecast.
Business confidence and consumer spending will improve should China be able to achieve its targeted rate, which Oxford Economics estimates will require inoculating 10 million people a day – twice the current pace. If Beijing is able to maintain that rate in the quarter through September as well, it could translate into some form of herd immunity, with 60% to 70% of the population vaccinated.
This would translate into a 0.4 percentage point gain to the gross domestic product growth rate from Oxford Economics’s 8.9% baseline scenario, which assumes five to six million doses are administered per day, according to its report released yesterday.
Household consumption this year could increase by 7% from its pre-Covid level in 2019, while export of tourism services will recover to about 50% of its 2019 level in the second half of the year, and imports of tourism services will recover around 70%. Fixed investment will also improve, the research institution said.
China’s vaccination drive has so far lagged the U.S. and European countries, with only 107 million of its residents, or 3.8% of the population, being administered the shots. The government’s successful containment of the virus had previously made it cautious about pushing for vaccination.
Read More: Facing Resistance, China Pushes Back 50 Million Vaccine Target
In a worse-than-expected scenario, where only 40% of population will be vaccinated by the end of the year, economic growth could end up 0.2 percentage points lower from the baseline case at 8.7%, the report said.
“While China’s economic outlook depends less on the speed of vaccine rollout than other countries’ do, it does matter for a ‘full’ return to normalcy domestically and to close the immunity gap with other countries, which will allow China to open its borders safely,” Tommy Wu, lead economist at Oxford Economics, wrote in the report.
Economists expect China’s GDP to expand 8.5% this year, based on median forecast of a Bloomberg poll. MDT/Bloomberg