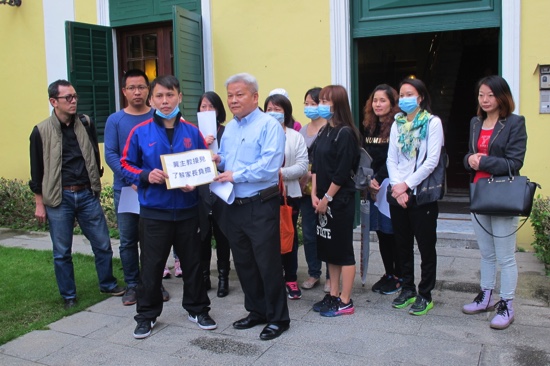 A group of parents of students from Colégio Diocesano de São José (5ª) (CDSJ5) delivered a letter requesting a meeting with Bishop Stephen Lee to the Bishop’s office yesterday, to discuss the rise of tuition costs.
This is the fourth time parents are calling for Bishop Lee’s intervention, following talks held in March and April. The letter delivered to his office was written by a group who named themselves “Colégio Diocesano de São José (5ª) Tuition Fee Concern Group,” which claimed to only have received a verbal reply by the Bishop’s secretary, after previous requests were sent to him.
According to the information provided on the school’s website, the tuition fees for the academic year of 2016-2017 will start from MOP31,900, up to MOP36,400 (including subsidies provided by DSEJ, which means that they will effectively pay between MOP12,100 and MOP14,400), depending on the year level of each student. The fee increases will take effect as of this May. Last year, the tuition costs ranged between MOP28,900 and MOP32,200. This latest increase marks the third year in a row there has been an increase in tuition costs. Mr Kwan, father of one of the students, said, “Our main goal is that, before a final decision is made by the Bishop, the school prevents the increase for this year.”
A staff representative of the Bishop’s office took the letter, saying that the school’s decision had already been reported to DSEJ. “The school is depending on this increase in order to provide a better environment for the students,” he said.  Furthermore, he informed the group that students with financial difficulties are eligible to apply for scholarships which are granted by both the school and by DSEJ.
DSEJ previously restated that the department does not control the increase of tuition fees in private schools.
Another issue that the parents raised referred to the school’s plan to enroll in the government’s free education system. However, the Bishop’s representative remarked that the issue is still under discussion.
Mr Man, another father said that he found the answers to be unsatisfactory. “When will it be solved?” he demanded. He also urged the school to quickly settle the matter of enrollment in the government’s free education system.
Fifty-four private schools
and 10 public schools are part of the system. Thirteen private schools are not part of it, including Pui Ching Middle School, Colégio Perpétuo Socorro Chan Sui Ki, Millennium Secondary School, Colégio Diocesano De São José, Macau, and the Sacred Heart Canossian College (the last school will be included in the system from the upcoming academic year).