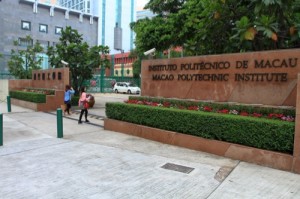 The Portuguese Language Teaching and Research Centre, established at the Macau Polytechnic Institute (IPM), will start providing training to teachers in mainland universities. With several publications and activities to be launched, this year is expected to be a “turning point” for the center.
The institute’s president, Carlos André, revealed that resources are being directed to mainland China, where around 50 professors will be allocated to several universities.
“In Macau we will train Portuguese teachers working for the Education and Youth Affairs Bureau, but we are working mainly in China. We started to provide training to Chinese universities in March, he said.
Carlos André, who headed the Faculty of Arts and Humanities of the University of Coimbra before coming to Macau in 2013, argues that teaching Portuguese in China demands a strong educational background.
“They [the teachers] report concrete obstacles. How should the structural difference between the languages be negotiated? How do you transition from oral speech to writing? Only specialized personnel can answer these questions,” he said.
To address these issues, the Portuguese Language Teaching and Research Centre is preparing short-term training programs in the Chinese cities of Guangzhou, Zhuhai, Hainan, Shanghai, Hangzhou, Nanjing, Dalian, Xian and Tianjin.
Carlos André revealed that the center is the result of the government’s perceived need to establish a “strategic option” in order to enhance the region’s role as a platform between China and Portuguese speaking countries.
Other training courses are being finalised for Chinese diplomats and IPM workers. According to Carlos André, the number of Portuguese teaching programs is expected to increase: “We should bear in mind that ten years ago there were six tertiary institutions in China teaching Portuguese, now there are 26. There’s a growing interest.” MDT/Lusa