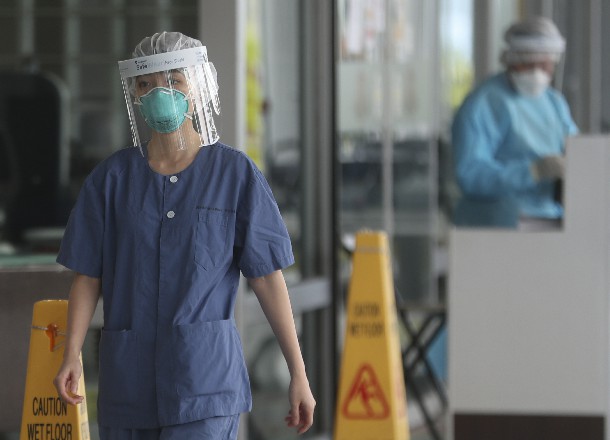 Eight people in Macau have now been confirmed with the novel coronavirus, information from the city’s health authority shows. The latest case, a local retired woman, has been categorized by the government as the eighth imported case, although some doubts remain.
The Health Bureau (SSM) surmised yesterday that as the patient has been mostly at home during the coronavirus’ incubation period, it is more likely that she contracted it while earlier visiting the mainland. Accordingly, the government is treating it as another imported case, rather than a local contraction.
The patient’s husband and co-inhabitant is being monitored in the quarantine facility, the SSM revealed.
Signs of the infection were initially detected by Kiang Wu Hospital after staff at the medical institution used a computed tomography scan to learn the patient was suffering from pneumonia. She was then sent immediately to the S. Januário Hospital, the centralized facility for the novel coronavirus testing, for confirmation.
At yesterday’s daily press briefing, the SSM revealed the patient’s itinerary over the past two weeks. The 64-year-old was hospitalized in Zhuhai for another illness during the week between January 10 and 17.
She did not disclose this crucial piece of information, according to the SSM, to the two medical staff attending her during her three separate hospital consultations in Macau.
When she was discharged from the Zhuhai hospital, she returned to Macau through the Border Gate on the same day. She stayed home for the next few days.
On January 21, she took a coach back to Sanxiang, near Zhongshan, in Guangdong, and returned to Macau through the Border Gate the following day. Between January 23 and 26, she mainly stayed home, except for a brief visit to the Areia Preta Health Center.
On January 28, she went to the government hospital for a medical consultation for fever and coughing. On January 30 and 31, she visited Kiang Wu Hospital twice for her fever. On both days, she took bus No.7 to and from the hospital.
On February 1, she was admitted to the private hospital and was hospitalized in a single room. On no occasion did she reveal to medical staff that she had been hospitalized in Zhuhai.
Regarding this, representatives from the SSM at yesterday’s press briefing reiterated that patients should disclose their travel history truthfully. “It doesn’t only affect yourself,” said the bureau’s director, Lei Chin Ion. “It can affect the entire community.”
However, Leong Iek Hou, coordinator at the SSM, reminded residents not to panic. “The patient wore a facemask almost the entire time, so her risk of spreading the virus is not extremely high.”
The coordinator reminded passengers on bus No.7 that they should be mindful of their own health.

Secretary for Economy and Finance, Lei Wai Nong, disclosed that he has met with the Macao Chamber of Commerce and the General Chinese Foreign Worker Agency. He said that an average of 35,000 foreign workers cross Macau’s borders each day, according to the official data.
Lei has encouraged the two organizations to provide accommodation in Macau for foreign workers living across the border, in this way reducing their need to continue with daily crossings. Meanwhile, the secretary has also encouraged the two bodies to allow non-essential staff to stay in their homes on the mainland.
“It is not personal,” said the secretary echoing the SSM director. “We should make changes right away to leave no room for regret.”
About 3,000 foreign workers from Hubei province are registered in Macau, with about 1,000 of them now back in the mainland and unable to return to Macau because of the requirement to provide medical certification showing they are free from infection.
Also announced at yesterday’s briefing, most civil servants will remain exempt from work this week, but some services will resume. For example, the Financial Services Bureau will provide essential services by appointment only. The full list of available services can be viewed on the government’s portal website.