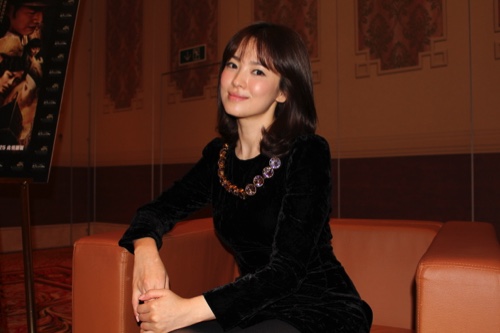 A star in her native South Korea, film actress Song Hye-kyo had to conduct extensive research and often debate her role with film director John Woo before shooting the Chinese movie ‘The Crossing I,” which premiered last Friday at the Venetian Macao.
“I am a Korean actress but this story has a Chinese background, it’s a Chinese movie [and the character is Chinese]. So I had to do a lot of research before shooting, and engage in a lot of discussions with our director. There was a lot of cooperation involved,” she told The Times ahead of the film’s premiere on Friday.
“The Crossing I” is an epic film about war and romance. Directed by John Woo and written by Hui-Ling Wang, the film is inspired by a true event: the sinking of the Taiping ferry in 1949.
The Chinese steamer capsized en route to Taiwan on January 27, 1949 after colliding with another vessel, killing over 1,500 passengers and crew. Taiping was packed with refugees seeking to flee Communism following the Chinese Civil War.
Ms Song revealed that she plays a woman born into a wealthy family, whose fate will be determined by the war. “I am married but my husband leaves [for] the war (…) the movie is based on a true story, it is very rich and [presented] in a very real Chinese style,” she said, adding that it was not too difficult to prepare and portray her character.
Although she did not find it too challenging to play this role, Ms Song stressed that the team had to engage in extensive debate and research to faithfully tell the film’s story. Nevertheless, she acknowledged that she “was very much focused on [her] role before and during shooting.”
“The Crossing I” is the first of a two-part story that follows three couples, who will be inextricably linked by a shared destiny. The second film will be released May 2015 in China.
After the Japanese surrender, communication officer Tong Daqing (Tong Dawei) holds a fake wedding photo with poverty-
stricken Yu Zhen (Zhang Ziyi), who is looking for her lover. Taiwanese doctor Yan Zekun (Takeshi Kaneshiro), on the Japanese payroll, returns home only to realize that his Japanese lover (Masami Nagasawa) has been repatriated. Commander Lei Yifang (Huang Xiaoming) marries a wealthy banker’s daughter Zhou Yufen (Hye-Kyo Song) despite strong objections from her rich family.
“Peace only reigns until the Chinese Civil War breaks out and throws their lives into disarray,” states the film’s synopsis.
A gala premiere and red carpet event took place on Friday at the Venetian Macao ahead of the film’s evening premiere. Among other movie stars, celebrities Song Hye-kyo and Tong Dawei, as well as director John Woo, were in Macau for the premiere.
This was the first time that the Korean actress has visited the territory. Song Hye-kyo said she did not have much time to get to know Macau but found it “a very beautiful and passionate city.”
John Woo is a Hong Kong film director known for blockbuster action movies, including Mission Impossible II, Broken Arrow and Face/Off. In a press conference on Friday, he said that releasing “The Crossing” was “in fact a dream come true.”
‘The Crossing I’ opened last Tuesday in China and it has been dubbed China’s “Titanic.”