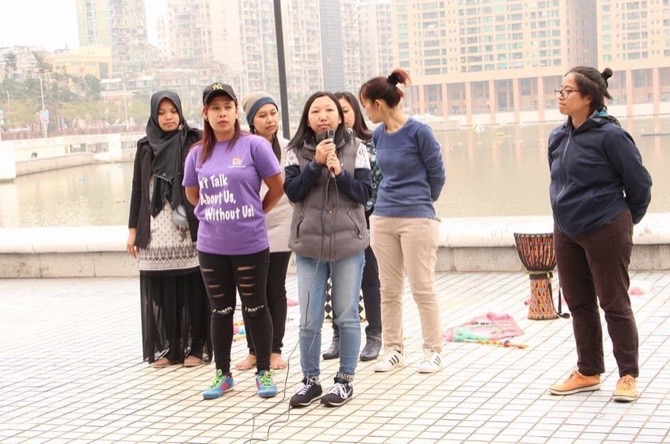 Erwiana speaking to her compatriots

In celebration of International Migrants Day, which is usually celebrated in December, Indonesian migrant workers gathered on New Year’s Day to welcome Erwiana Sulistyaningsih, who encouraged them to fight abuse and stand up for their rights.

The 26-year-old Sulistyaningsih, who first appeared in the global media spotlight in 2014, was back in Hong Kong after winning the last leg of her two-year legal battle last week. She received nearly HKD810,000 in damages for the abuse she experienced for over eight months at the hands of her employer.

“For the domestic workers who have experienced cases like I did, don’t be afraid, be courageous and please speak out,” she told state broadcaster TDM.

“Many migrants are afraid to speak out […] We can’t do anything if they don’t want to speak out [so they] should fight for [themselves] and not be afraid,” said Sulistyaningsih, who was named one of the world’s 100 most influential people by Time Magazine in 2014. 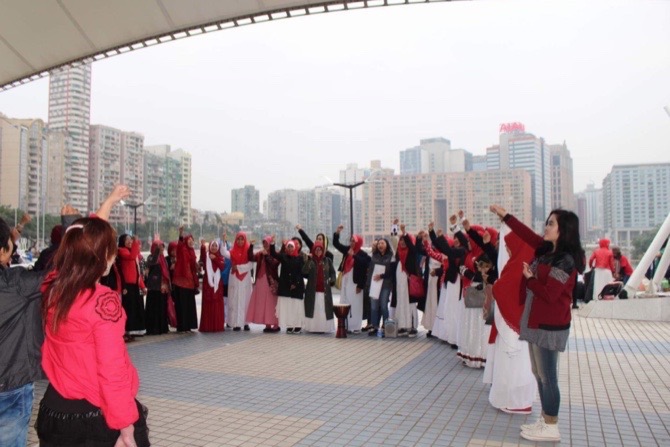 Indonesian migrant groups in Macau have recorded only a few cases of abuse as domestic helpers here are not required to live with their employers, unlike Hong Kong.

Yosa Wariyanti, president of the Indonesian Migrant Workers Union, said that they have only recorded three cases of abuse, one of which is now being processed by local authorities.

However, she believed that physical abuse among domestic workers in the region should not go unreported, citing the absence of rights protection for them.

“For us, Erwiana’s case is our case […] so we must be braver if ever a similar situation happens to us,” she told the Times.

“[She encouraged us] to not be afraid to report [abuse] to the police, or seek some help. She inspired us to never give up to fight for our rights, especially if we did nothing wrong.”

Wariyanti also noted that domestic helpers do not know where to seek help when encountering physical abuse and are fearful of being blacklisted in Macau.

She added that the shortened visa period after a contract ends – be it by the termination or natural conclusion of a contract – also hinders these workers from seeking legal aid. LV