Even HK’s homegrown bankers are considering moving away 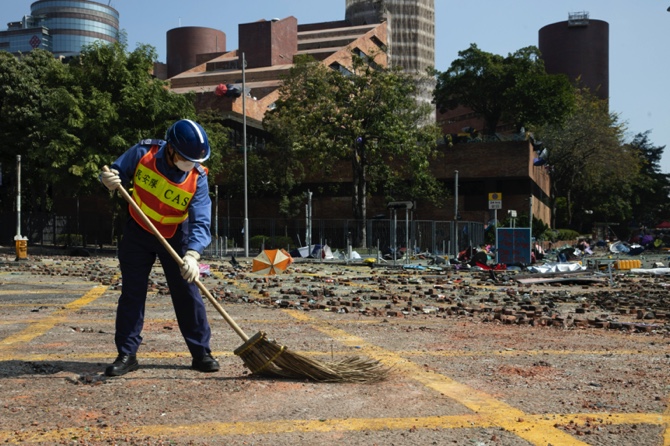 A senior banker born in Hong Kong plans to try getting a U.S. green card, just in case the city’s social unrest worsens.

Two other executives in town are working with a recruiter in Shanghai to move there, betting its future may be brighter. And at the local outpost of one of Europe’s top investment banks, a dealmaker says lifelong Hong Kong residents in his group are weighing their options, looking at a variety of countries.

Expats and mainland Chinese working in Hong Kong’s financial hub were the first to talk about moving away when protests began escalating months ago. But the prolonged disruption to work and life since then, and the spotlight being cast on China’s control of the city, have pushed some Hong Kongers to start weighing the possibility of moving abroad.

There’s certainly no exodus. But the private talks among colleagues, employers and recruiters show how badly nerves are fraying in a city where clashes play out daily on television and sometimes on streets outside major financial firms. With no end in sight for the fires and tear gas, a growing number of people in office towers are at least pondering how their industry may be affected long term and whether they should look elsewhere.

“They are in the prime of their career and now they are fed up with the social instability in Hong Kong and asking, ‘Where is my next step?’” said Eric Zhu, the Shanghai-based recruiter at Morgan McKinley. “There are much fewer opportunities in Hong Kong, whereas in Shanghai hirings are on the rise.”

Zhu said he originally counseled the two managing directors who reached out from Hong Kong to avoid Shanghai, citing its higher tax bracket and different legal system, and to perhaps consider Singapore. But they couldn’t be dissuaded, he said.

Some have come to believe China will favor Shanghai’s continued expansion as a financial center, creating more opportunities there in the future.

The banker whose teammates are rattled said they, too, are considering mainland China, as well as the U.S. and Canada. Several lawyers also confided they are considering a move.

The mere thought of leaving – particularly for the mainland – is a sensitive subject in a city divided over its relationship with China. Many residents have long taken pride in the unique character of their hometown, and have fretted for decades over losing certain freedoms unavailable on the mainland. Such concerns fueled departures before Britain returned the former colony to Chinese rule in 1997.

None of the people who described thoughts of moving agreed to be named for this story. Even some recruiters demurred, citing the charged times.

While statistics on recent departures are hard to come by, there is evidence of the interest: Applications are soaring for so-called certificates of no criminal conviction, an initial step toward moving abroad. More than 3,500 people in Hong Kong requested the documents in each of the past three months, up from about 1,900 as the year began. Not everyone who receives the certification actually leaves.

Locals polls also have indicated an increasing share of residents are keen to move abroad.

Some recruiters in other financial hubs acknowledged they have seen an uptick in interest in leaving Hong Kong, but said there’s been little movement so far.

“We have witnessed a small increase in the number of applications to roles in Australia from Hong Kong-based professionals,” said Andrew Hanson, a managing director at recruitment firm Robert Walters in Sydney. But “the volume of the applications is not enough to suggest that there is a notable shift or trend in talent flow of professionals due to the political unrest.”

It can be difficult to discern who’s leaving because of the protests and who might be chasing business. One recruiter said he’s hearing from a growing number of private bankers in Hong Kong who want to move to Singapore, where some clients are thinking about moving their assets.

Far more Hong Kongers are hunkering down and adjusting to life in a potentially changed city. Financial professionals, worried that its government-run schools have become far too politicized, are applying to move their children to international schools in the city or boarding schools overseas.

Others are merely developing contingency plans. Last month, the South China Morning Post reported that after the demonstrations began, sparked by a bill that would have allowed extradition to mainland China, the number of residents looking to snap up homes in countries offering visas to property owners has multiplied. But those countries – such as Greece, Portugal and Malaysia – also happen to be top vacation destinations.

And of course, many professionals from Hong Kong agree with the protesters’ demands. As street demonstrations intensified in the central business district last week, some emerged from office towers to show support. Bloomberg