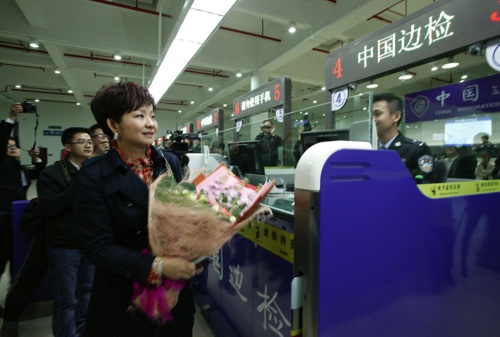 Macau’s three borders are operating under extended crossing schedules since yesterday in a change welcomed by residents and non-resident workers who are now presented with more options to travel between Macau and mainland China.
The Public Security Police (PSP) said that over 4,000 people crossed Border Gate yesterday between 6am and 7am, TDM News reported. Senior officer of PSP’s Immigration department Ku Keng Hin said that the new schedules helped ease congestion during peak hours.
“We recorded 4,400 entries and departures between 6am and 7am. Some imported workers and students come less in a hurry.  They could come here half an hour earlier at 6:30 or even at 6am.  They could avoid the peak [traffic] between 7am and 8am,” he said.
Yesterday at midnight the Lotus Bridge Cotai Frontier Post (connected to Hengqin) began operating on a 24-hour basis, while the Border Gate (connected to Gongbei) began operating between 6am and 1am, an hour longer before and after its previous closing and opening times.
Finally late night crossings through the Cross-Border Industrial Zone Checkpoint opened between midnight and 7am only to pedestrians, including Macau residents, non-resident workers from mainland China and students.
The Cotai checkpoint’s new schedule applies to all commuters.
Residents said that they have now more time to cross the border and at night can also easily get the bus to the Border Gate.
Before the borders’ new schedules came into force, over 22,000 people on average crossed the city’s borders every day between 7am and 8am. Today, less than 6,000 people crossed Macau’s borders during the same hours. Authorities said that congestion will ease during usual peak-hours as people crossing the border will now be arriving and departing across a broader time frame.
The Transport Bureau’s director Wong Wan gave a positive review of public buses response to the border crossing hours-extension.
Bus routes were enhanced and bus service hours were extended. Wong Wan revealed that during yesterday’s morning peak hour about 1,300 people used buses at the Border Gate, which helped ease the usual congestion, Radio Macau reported.
“This had a greater effect at the Border Gate. Between 6am and 7am there were about 1,300 people getting a bus at the checkpoint bus stop, which eased the usual congestion experienced in the morning,” Mr Wan said, adding that it also helped reduce bus overcrowding between 7am and 9am.